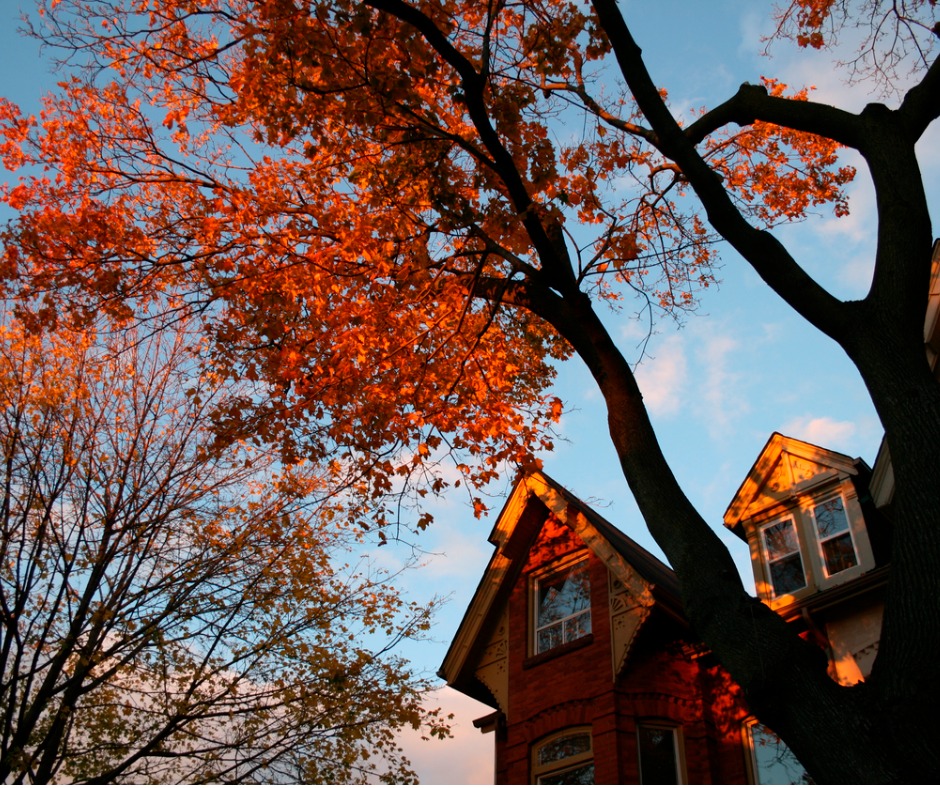 Latest numbers continue to show a stalemate - for now. 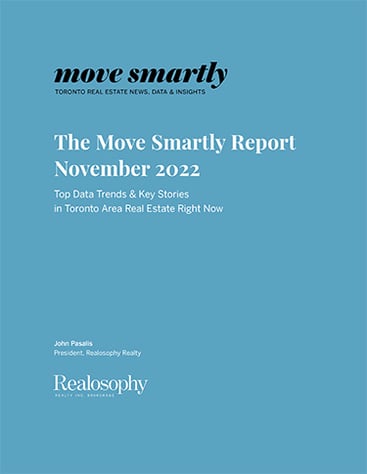 Looking at the most recent statistics for the Greater Toronto Area (GTA) market for the latest month available, October 2022, we are seeing that even as sales numbers remain at 20-year lows, home prices have stabilized since July in part because there are relatively few homes available for sale as new listings were also at a 20-year low in October.

The Months of Inventory (MOI) which is a measure of inventory relative to the number of sales each month (see Monthly Statistics section below for more information on this measure) was unchanged at 2.3 MOI in October, indicating tight supply conditions.

For detailed monthly statistics for the Toronto Area, including house, condo and regional breakdowns, see the final section of this post below.

On The Ground: How Low Active Listings Are Keeping Prices Flat

However, this low level of sales is not entirely down due to a drop off of buyer demand, but also seller supply, as very few homes are being made available for sale.

The relatively tight inventory of homes available for sale has made this market challenging for buyers eager to purchase a home. Many clients at my own brokerage are eager to buy, but they also don’t want to compromise too much because — unlike in the very hot competitive market conditions we’ve been seeing in so many past years — right now, they don’t feel like there is any urgency to buy.

Because of this, the nicest homes that are coming onto the market each week are receiving a lot of interest while homes that have features that buyers might find slightly less desirable are sitting on the market for months.

In the chart below that shows the number of homes that sold during the month of October in the GTA since 2000, we can see that sales last month were at their lowest level since 2000. 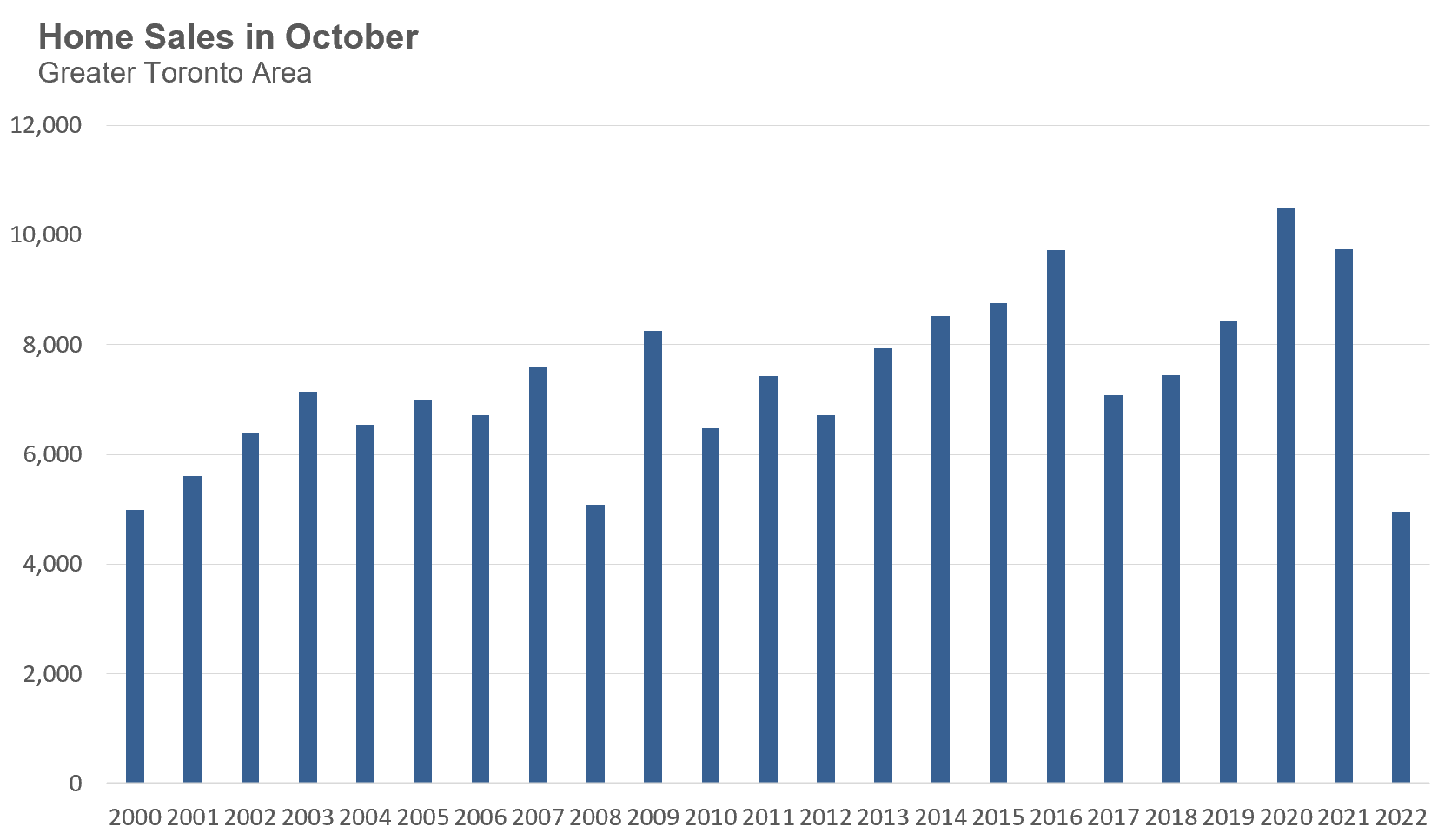 New listings last month were at their lowest level since 2002. 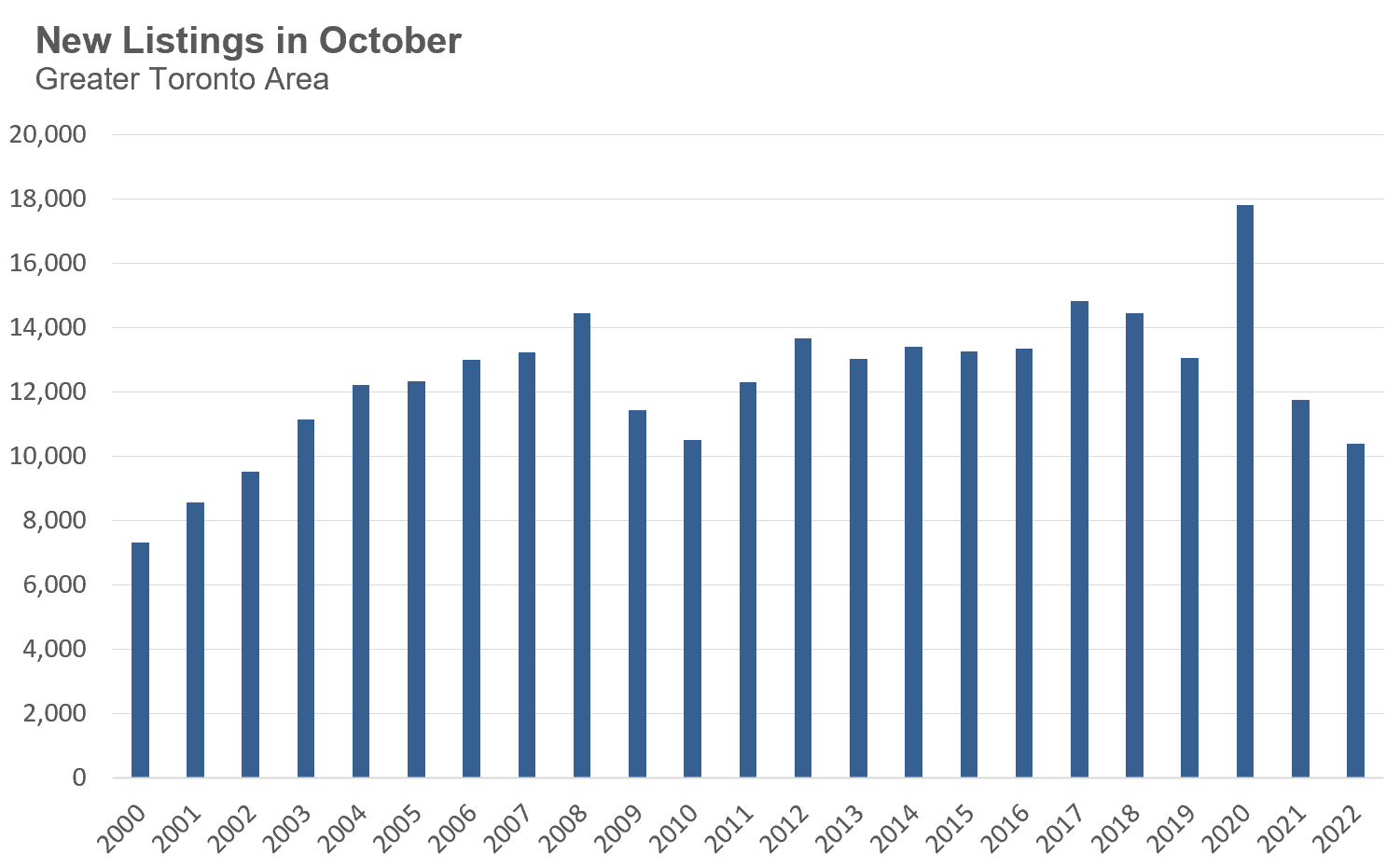 When looking at the active listings on the market, we see that active listings were lower in 2016 and 2021 due to the fact that the housing market was in the midst of a housing bubble in those years in which buyer demand overwhelmed supply. Those two years aside, the last time we had so few homes on the market for sale for the month of October was in 2001. 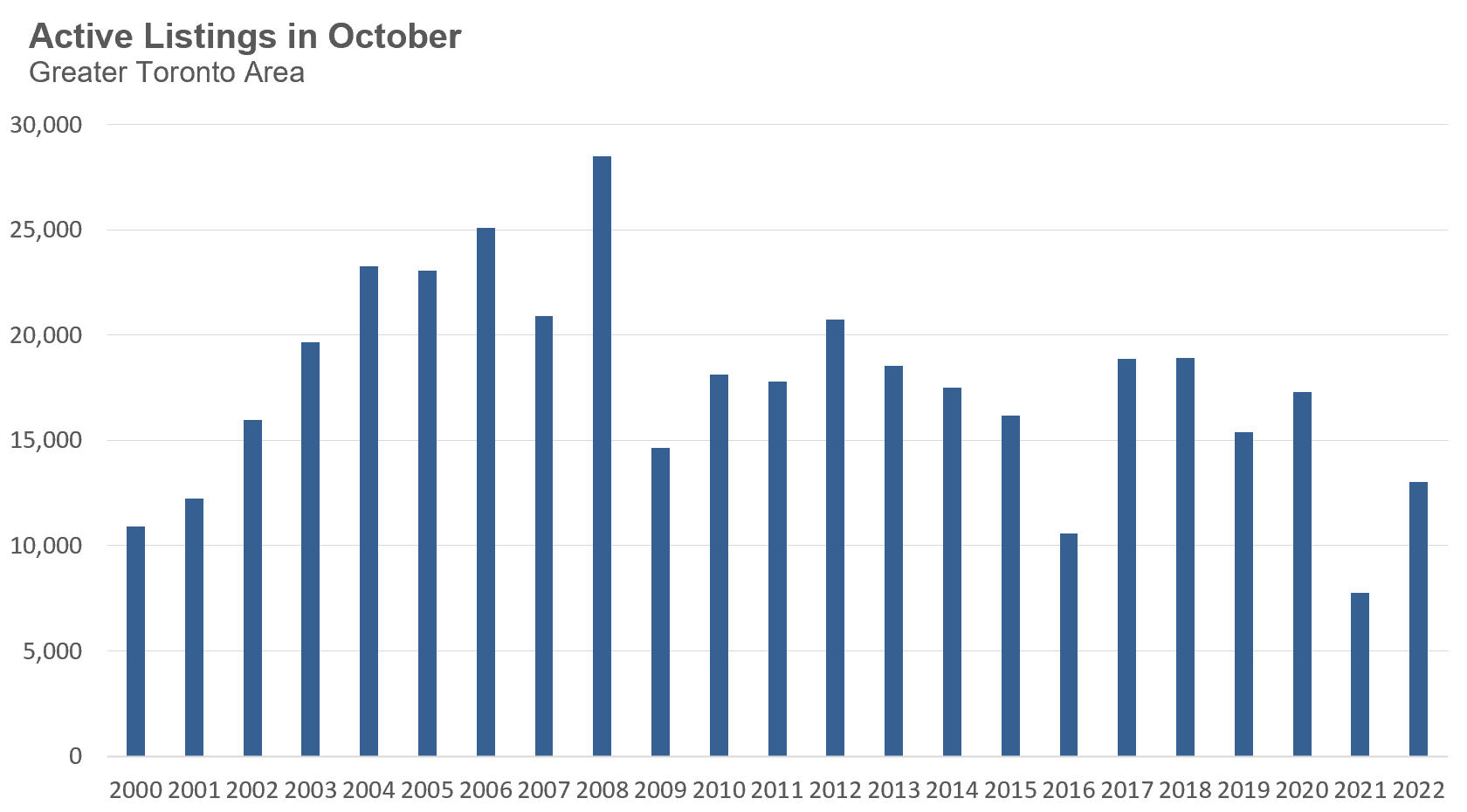 While higher interest rates have definitely driven much of the decline in demand we have seen since the first quarter of this year, part of the soft sales volume today is also a function of the fact that there are relatively few homes available for sale. Buyers can only buy what is available for sale.

The last time October sales were close to this year’s volumes was during the financial crisis in 2008, but the big difference between then and now is that there were 28,000 homes available for sale at that time compared to just 13,000 today.

This lack of seller activity resulting in a low inventory of homes available for sale has helped to keep home prices relatively flat since July.

House sales (low-rise detached, semi-detached, townhouse, etc.) in the Greater Toronto Area (GTA) in October 2022 were down 47% over the same month last year and represents a 20-year low for the month of October. Home sales were also down over the previous month, a period when sales are usually up month over month. 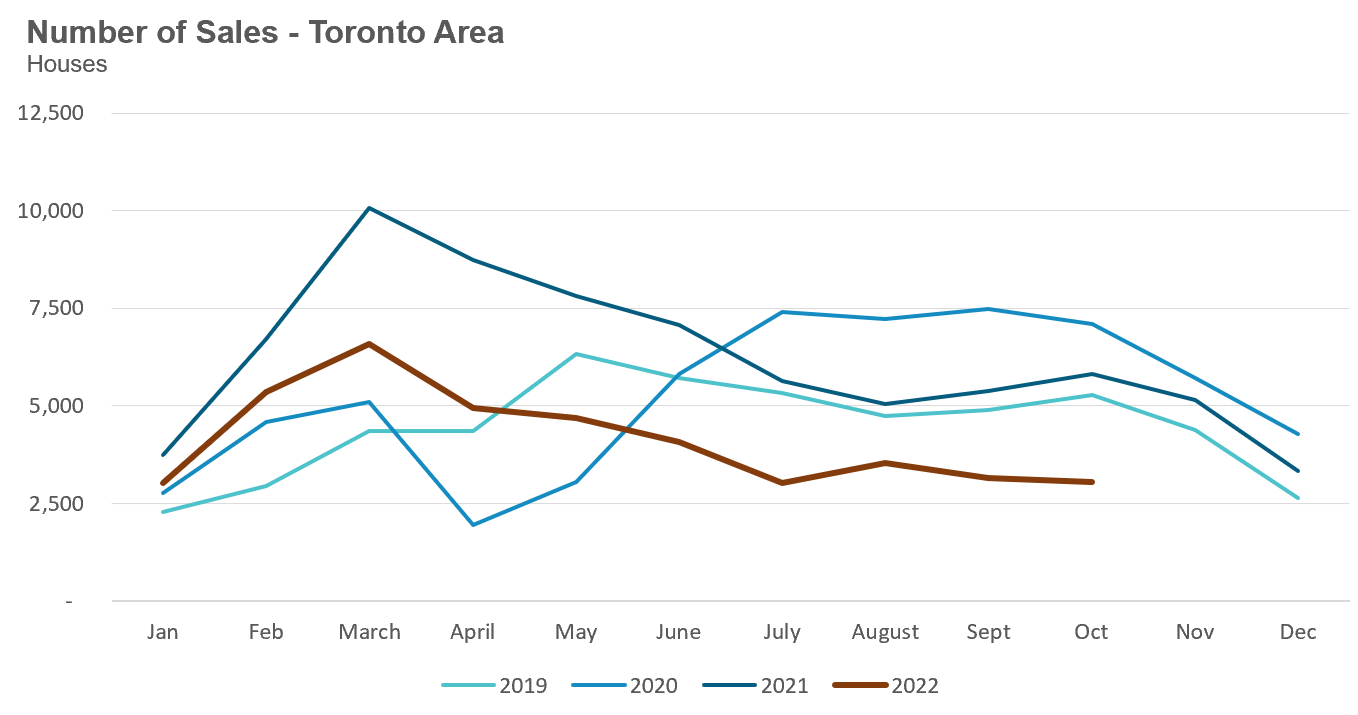 New house listings in October were down 10% over last year, and represent a 20-year low for the month of October. 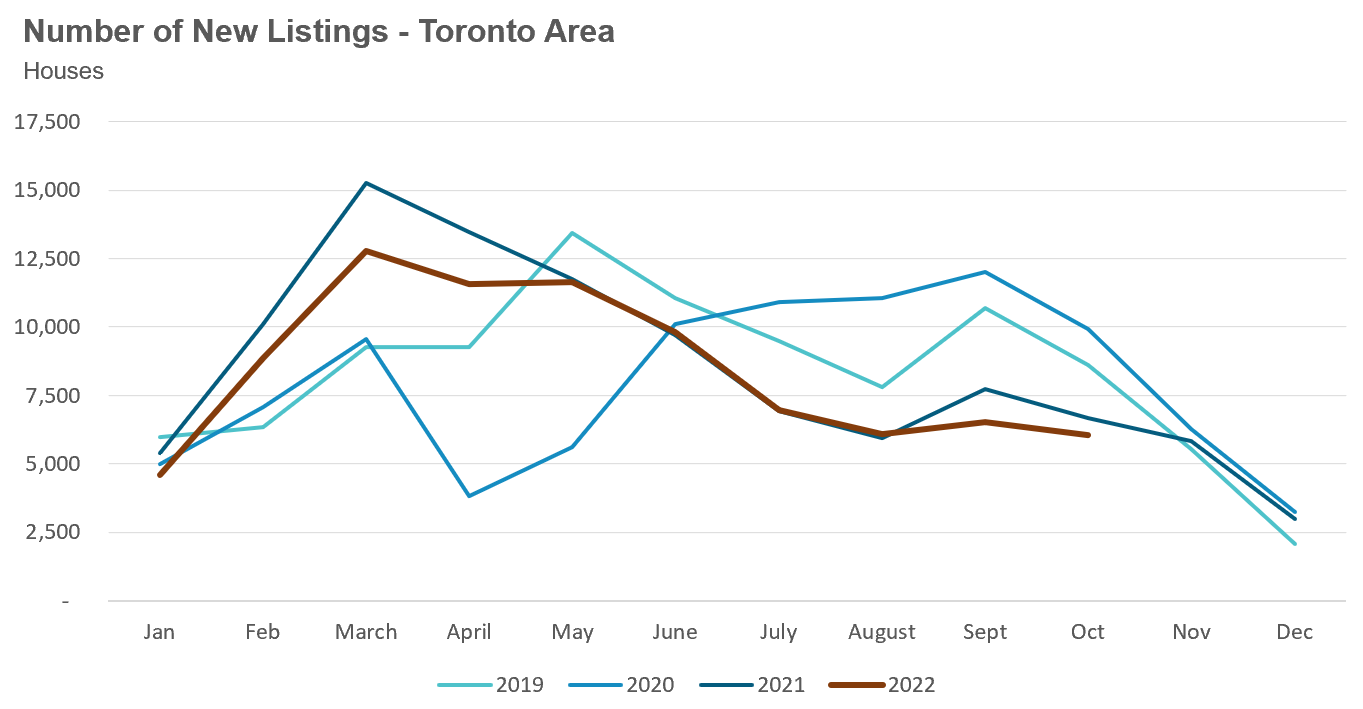 The number of houses available for sale (“active listings”) was up 91% when compared to the same month last year, but still well below pre-COVID levels for the month of October. It’s worth noting that the low inventory levels in the second half of 2021 were due to a surge in demand as the market accelerated towards the peak in February 2022. 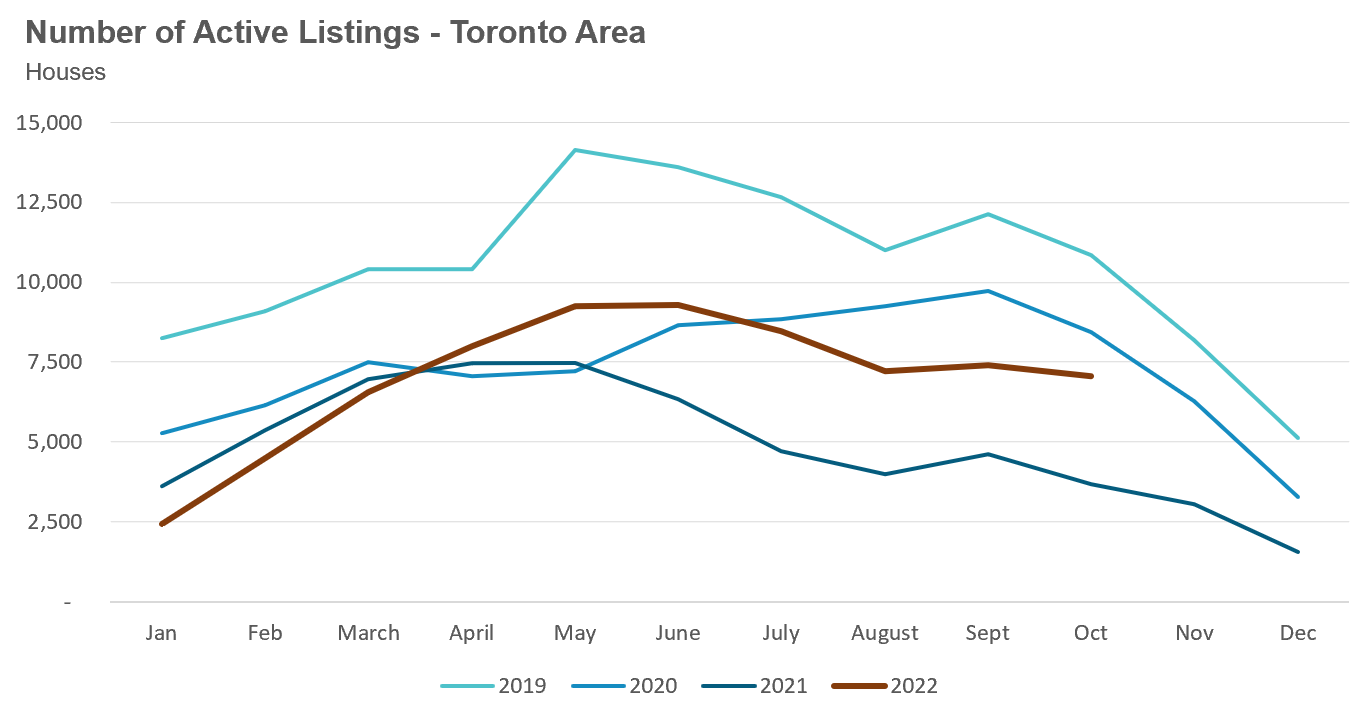 The MOI for houses remained unchanged at 2.3 MOI in October. 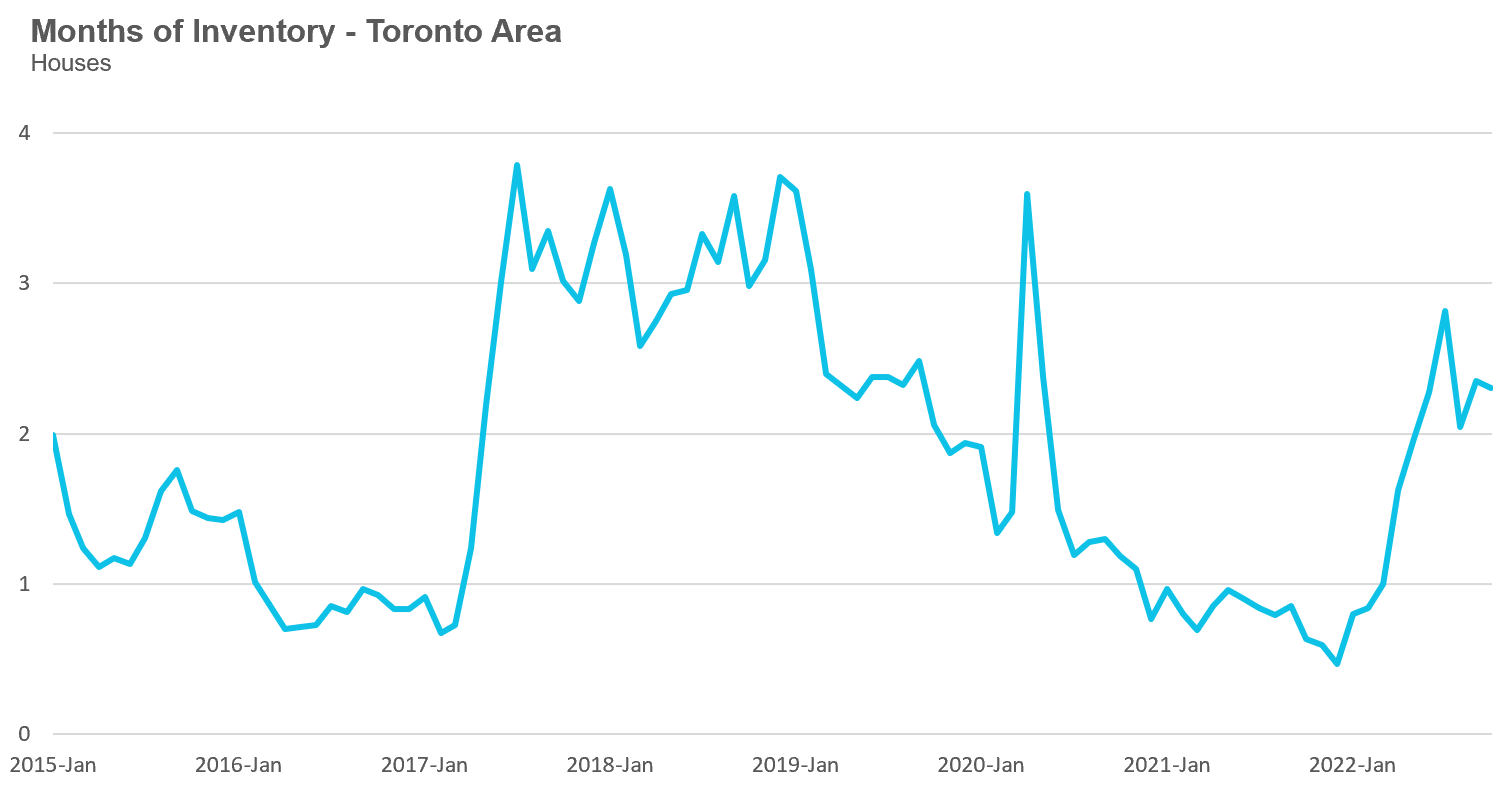 The share of houses selling for more than the owner’s asking price increased slightly to 30% in October. 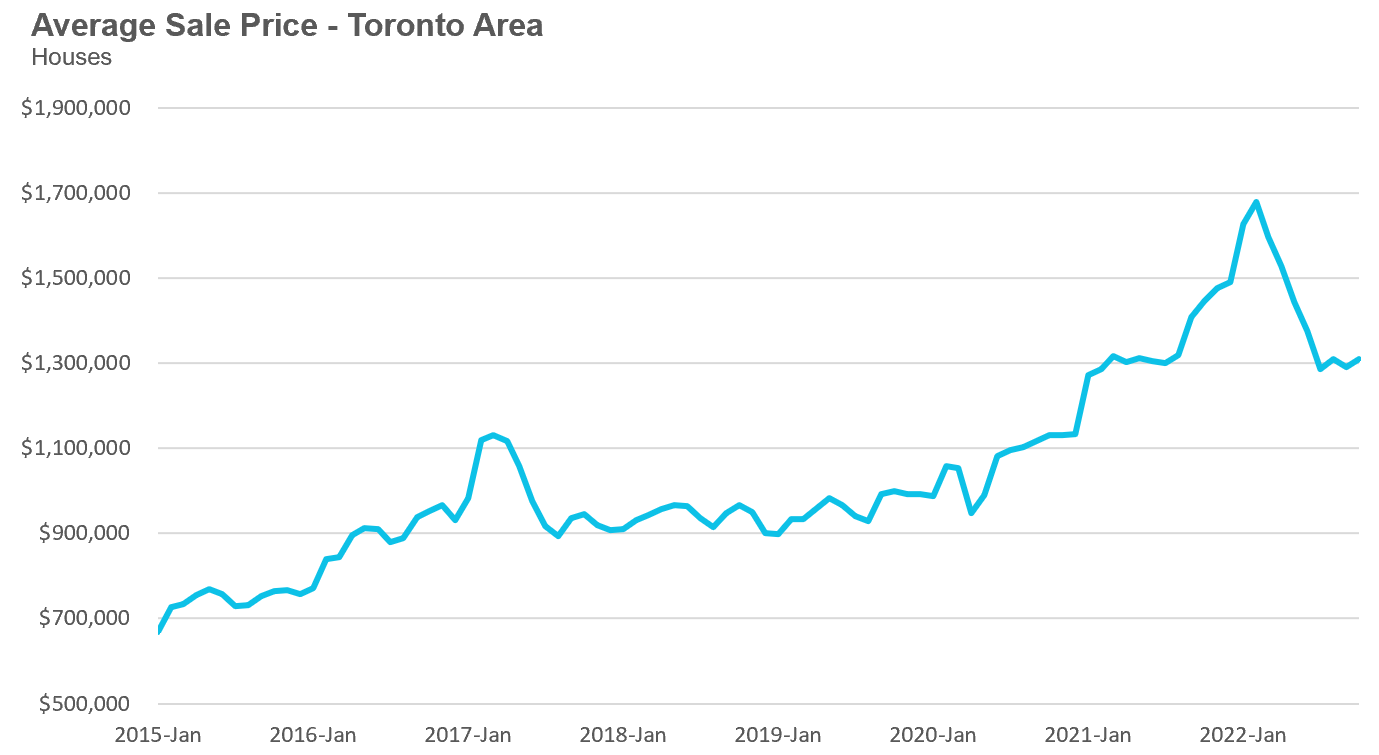 Condo (condominiums, including condo apartments, condo townhouses, etc.) sales in the Toronto area in October 2022 were down 53% over last year and well below pre-COVID sales volumes for the month of October. 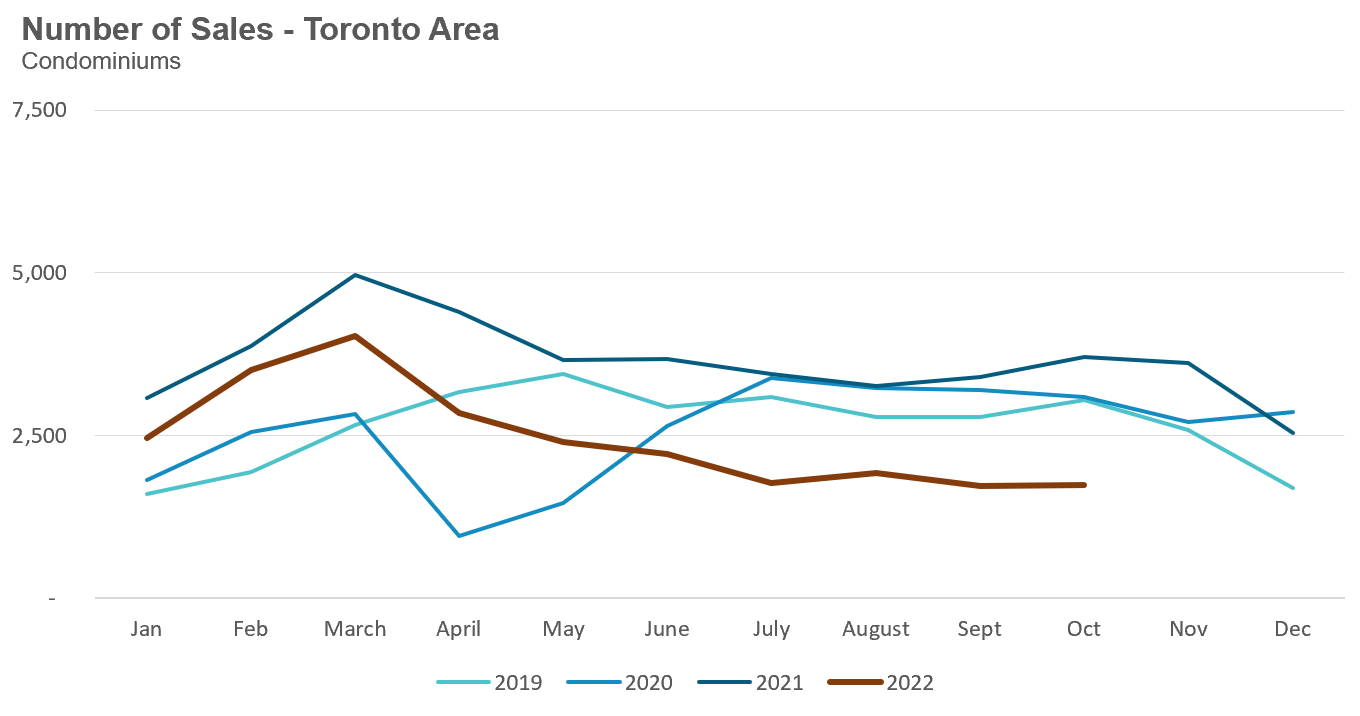 New condo listings were down 16% in October over last year and in line with historical listing volumes for the month of October. 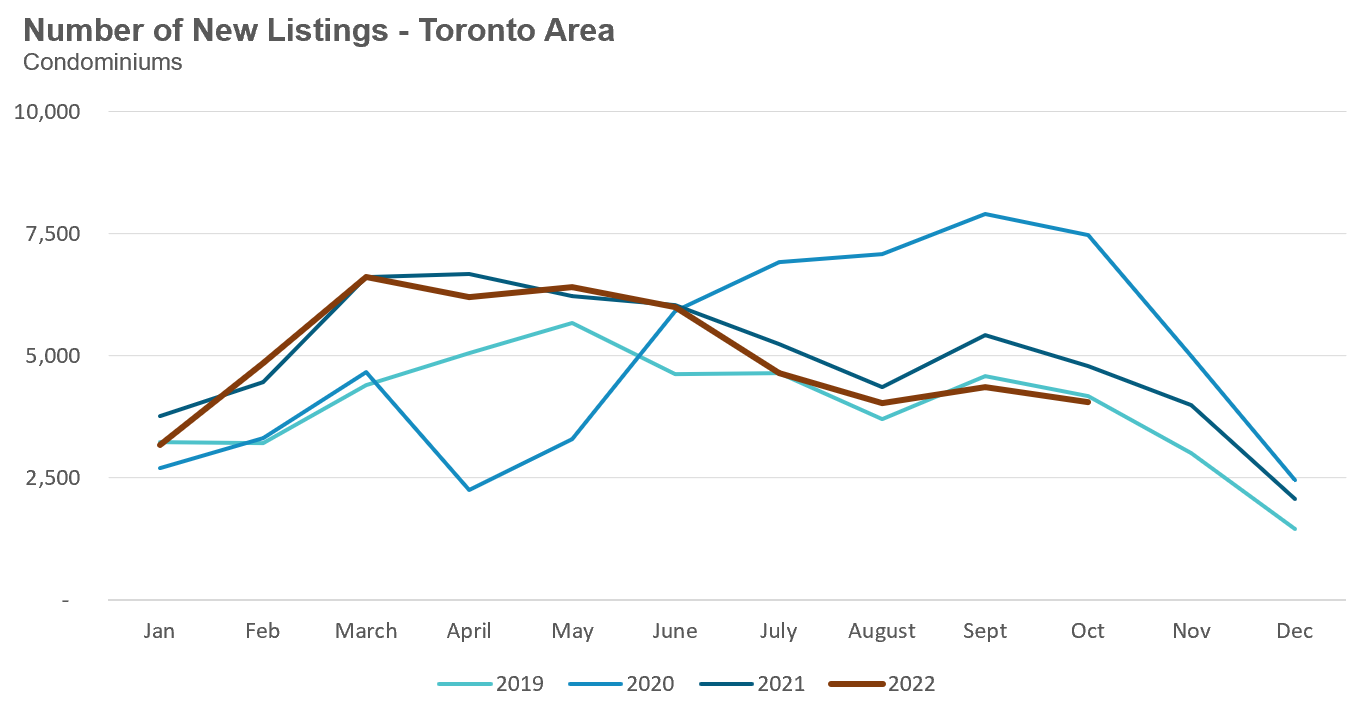 The number of condos available for sale at the end of the month, or active listings, was up 44% over last year. 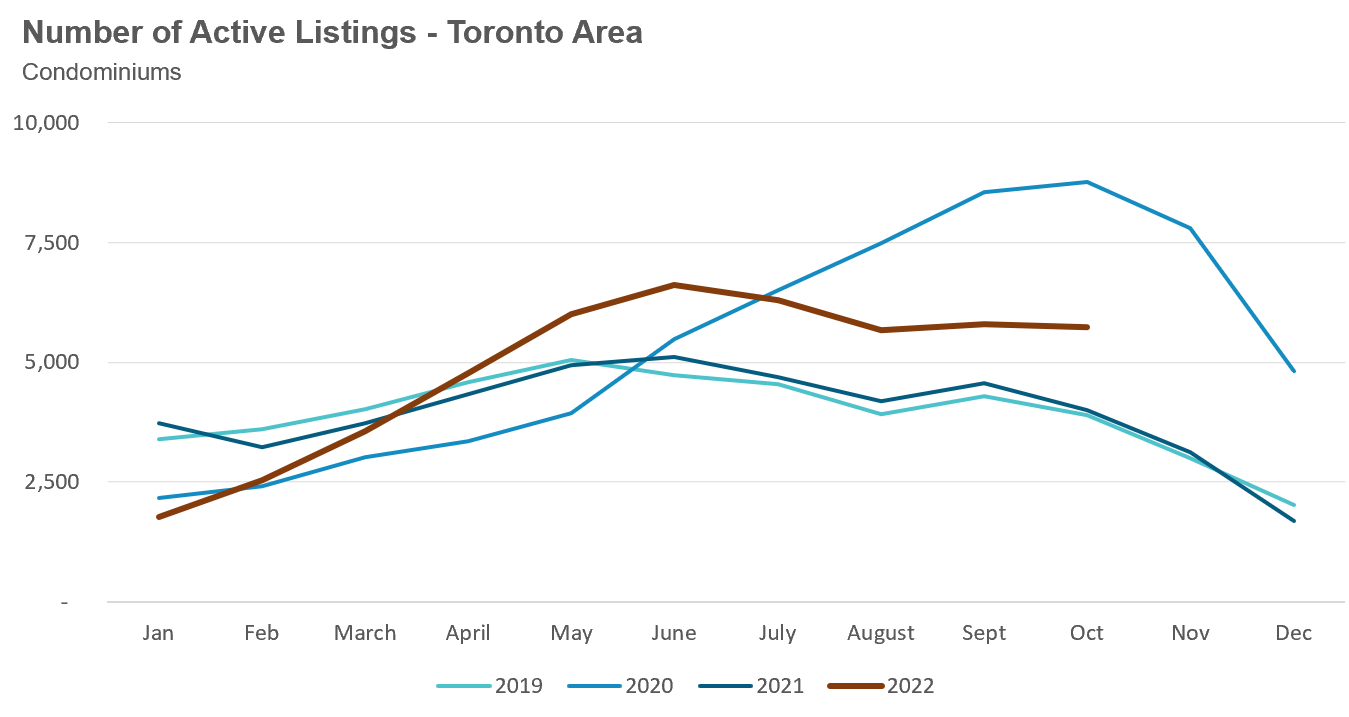 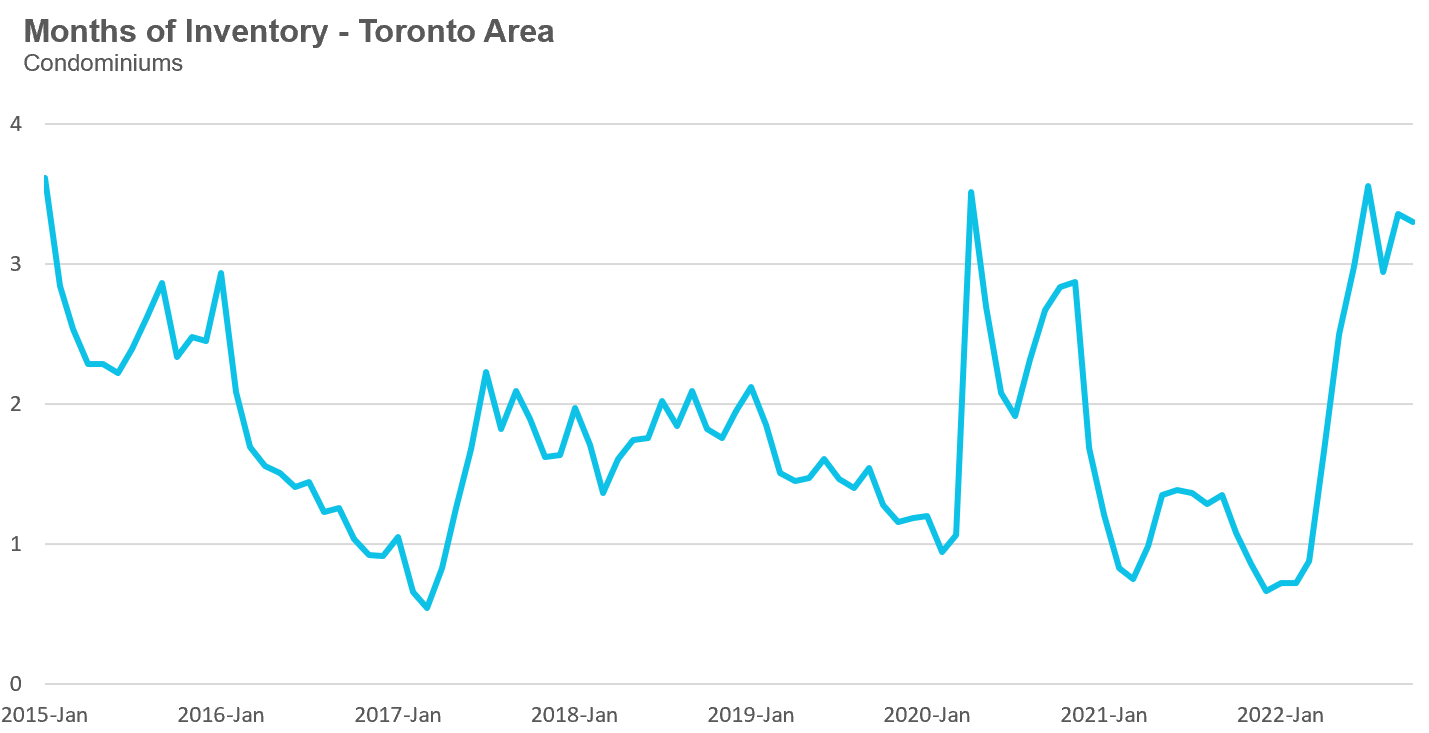 The share of condos selling for over the asking price was unchanged at 19% in October. 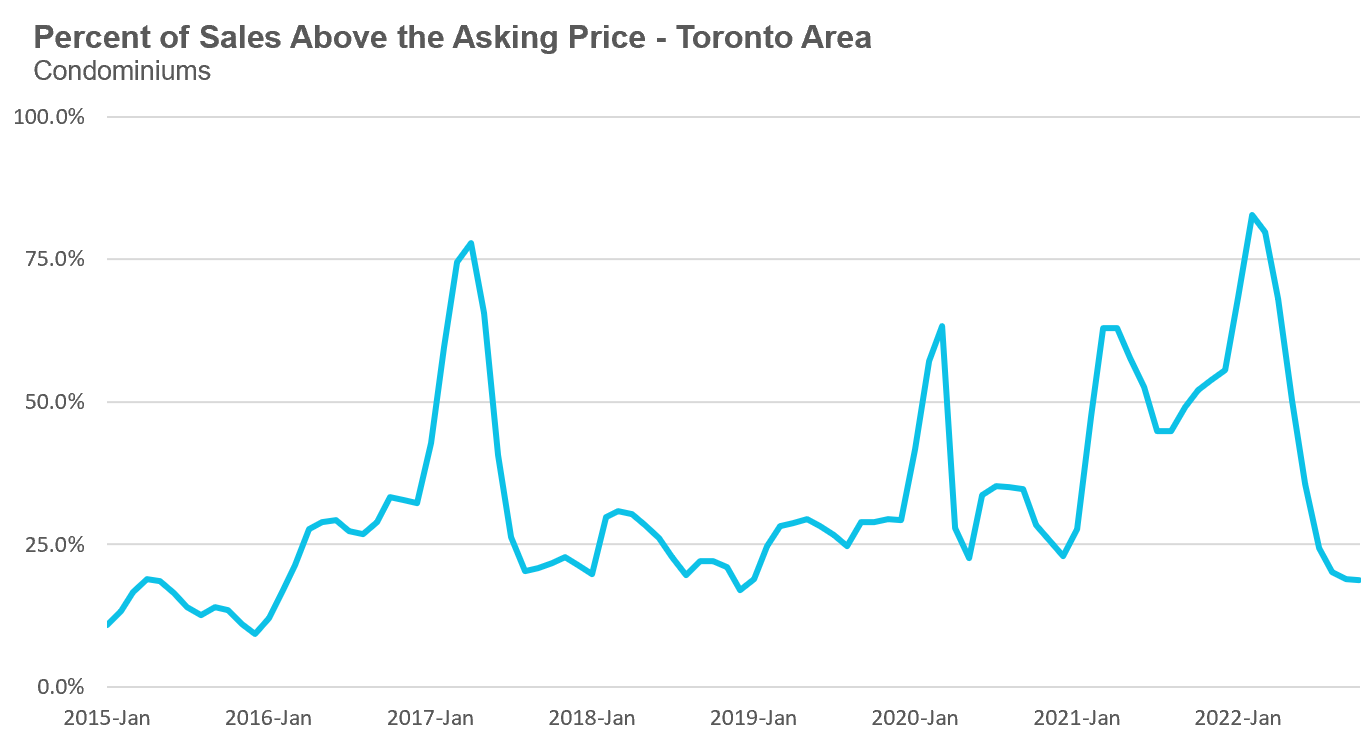 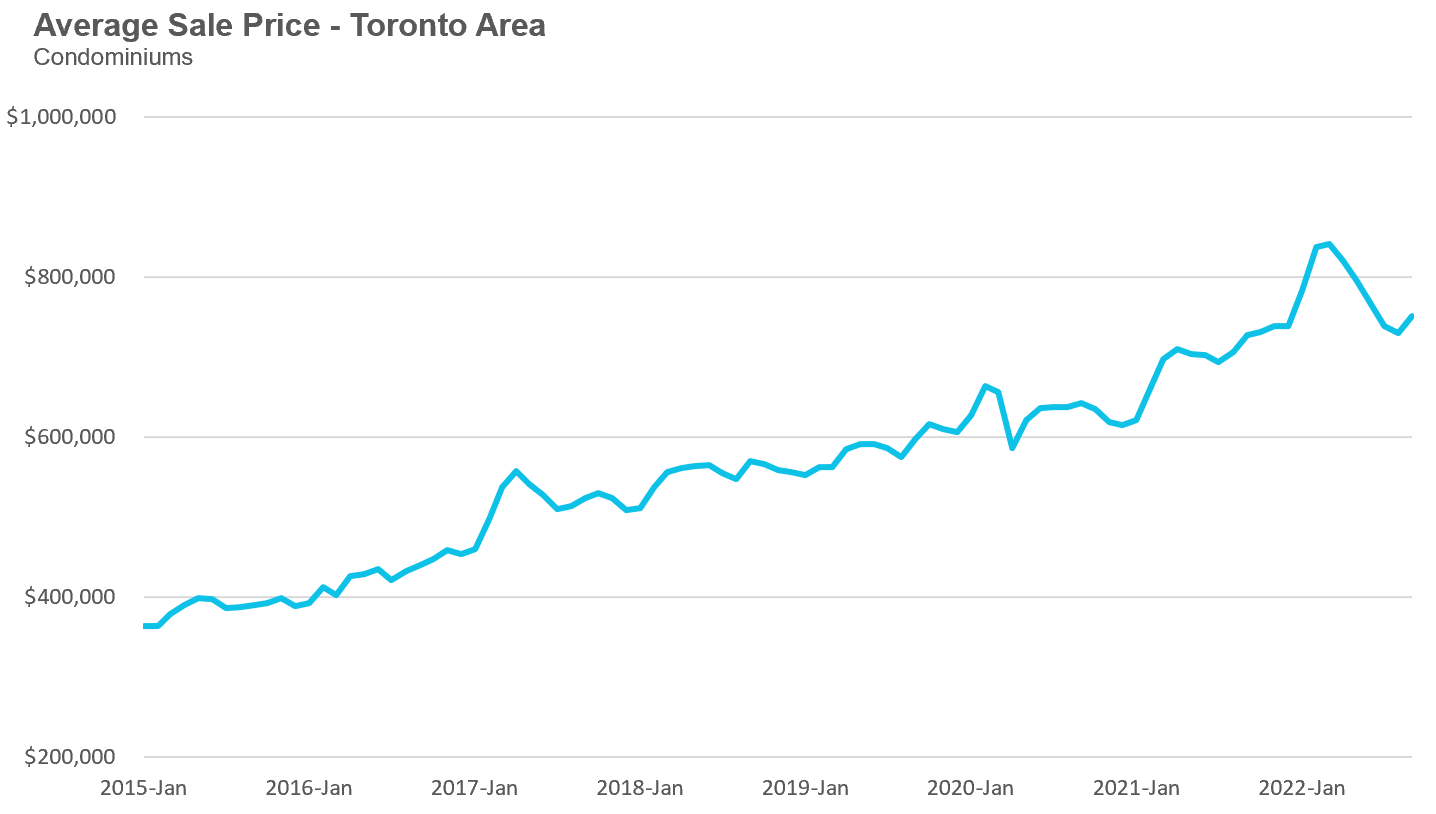 Average prices were down over last year across all five regions with York and Durham Regions seeing the biggest decline in prices. Sales were down significantly across all regions and inventory levels were well ahead of last year’s level.

Average condo prices continue to be flat or up over last year in all five regions. Sales were down significantly across all regions and inventory levels were well ahead of last year’s level. 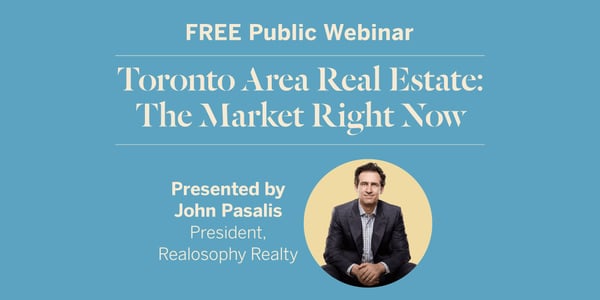