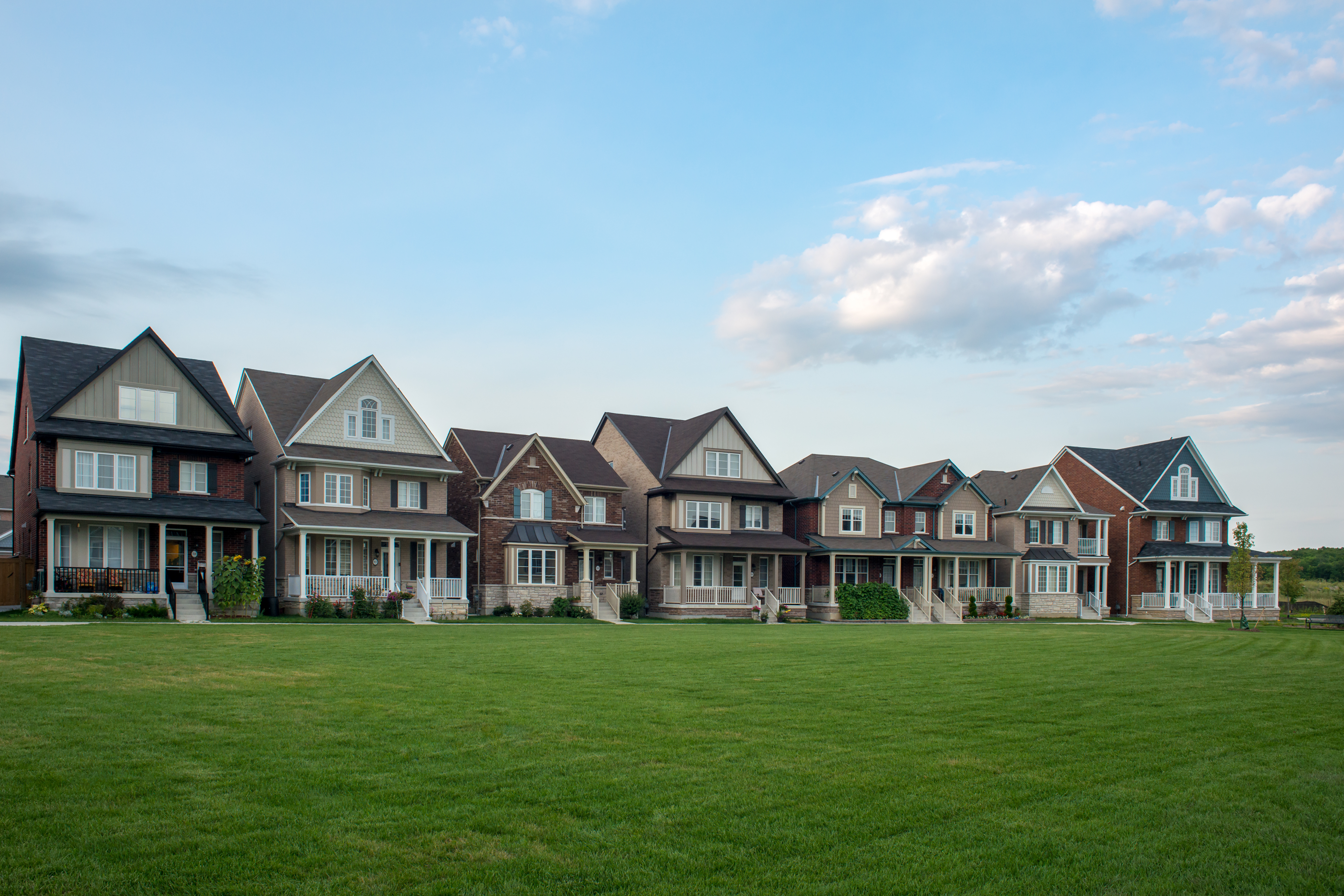 Why are Detached Home Sales Booming in York Region?

York Region detached homes were the hardest hit by a bubble in 2017 - so why are sales booming again?

One of the more interesting trends I’ve been seeing in the Toronto and Greater Toronto Area (GTA) real estate market over the past few months has been the increase in sales for detached homes in York Region.

This is interesting for a couple of reasons.

As reminder, research I published in 2017 showed that detached homes in York Region was the epicentre of the GTA’s housing bubble. At the peak of the market 34% of homes purchased in Newmarket and 28% of homes purchases in Richmond Mill were being bought by investors.

When the Bank of Canada used my research on investors they found that the neighbourhoods that had the highest percentage of homes purchased by investors also saw the biggest decline in prices.

After sales and prices fell in 2017 the rest of the GTA gradually recovered while York Region detached homes were very sluggish. Sellers were very reluctant to reduce their price hoping to get the peak prices reached in 2017 which resulted in homes sitting on the market for over a year. Prices also continued a gradual downward trend.

Things have picked up considerably for detached homes in York Region over the past few months. Between March and May, monthly sales were up 14%, 25% and 31% over the previous year.

We can see this trend in the tightening of inventory over the past few months in the chart below. For a year and a half, York Region detached homes had roughly six months of available inventory (and as high as seven months) compared to the GTA average of under three months of inventory. Inventory levels have been trending down since the beginning of the year and now sit at roughly four months. 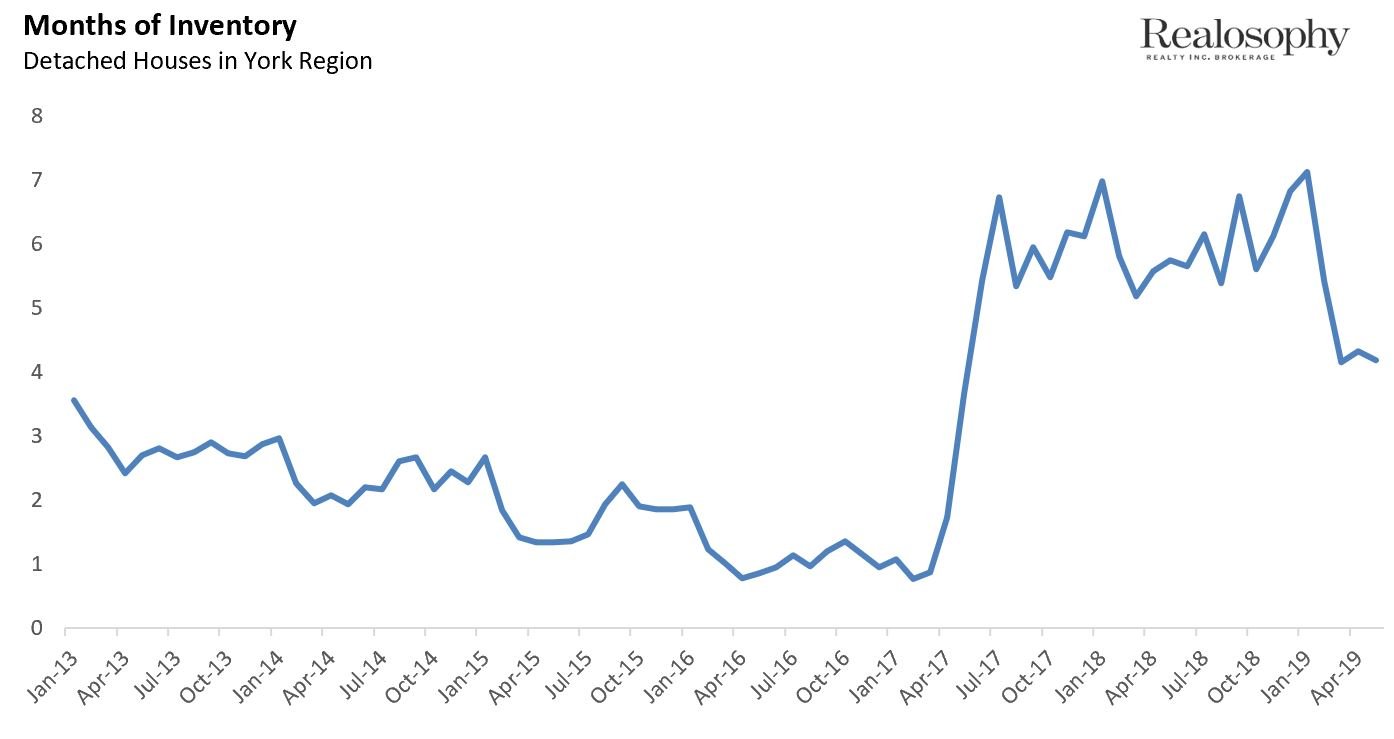 When inventory trends down as it has in York Region, this typically results in a gradual flattening and perhaps eventual increase in prices – but we are not seeing that yet in the chart below.

Average prices are still down over last year, but this is partly driven by the fact that high end home sales (over $2M) have remained flat over last year. This means there are proportionately fewer high-end homes selling this year vs last year which will naturally put some downward pressure on price.

On the surface, this renewed demand in York Region is a positive sign for a region that was hit hard when the housing bubble burst – but looking a bit closer at the data raises a few questions.

When you look at the increase in detached house sales between Jan and May of this year vs last year by municipality, you see that there are some big differences in the chart below. 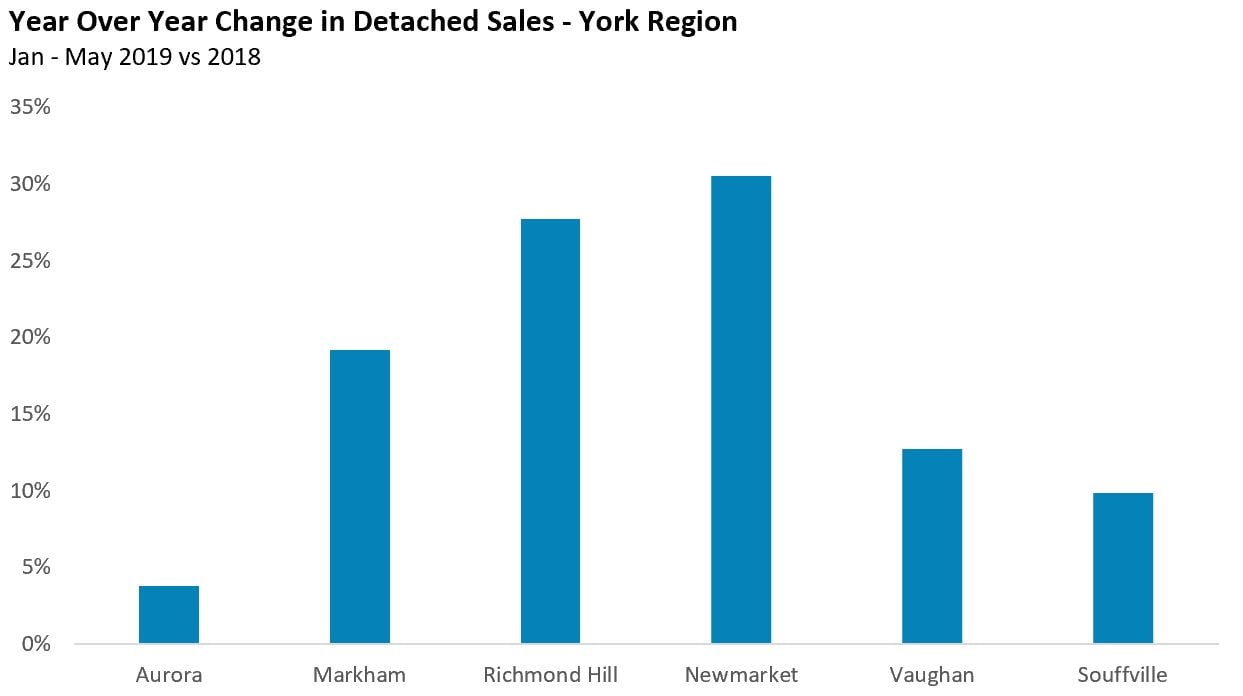 Is this increase in sales this year coming from regular home buyers or are investors jumping back into their favourite markets in a big way?  If investors are driving this surge in sales then we'll need to keep a close eye out for yet another speculator driven housing boom.

A specialist in real estate data analysis, John’s research focuses on unlocking micro trends in the Greater Toronto Area real estate market.  His research has been shared with the IMF and cited by the Bank of Canada and CMHC.