This month, The Move Smartly Report digs into where Toronto's surge in condo rental supply is coming from.

Anyone looking to rent a condo apartment in the Toronto area is seeing two important trends right now: one, there are a lot of units to choose from, and two, rents keep falling every week.

In September, there were just under 12,000 condo apartments listed for lease on Toronto's MLS system compared to just 3,332 last year. 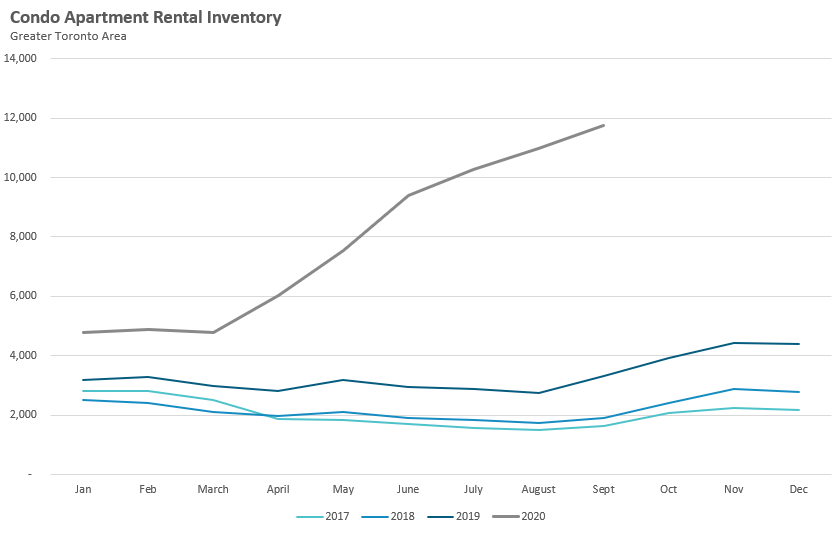 This has pushed average rents for the Greater Toronto Area down 12% from their peak last year in August. The downtown core is seeing an even bigger decline in prices with the old City of Toronto seeing average rents down 16% over last year, returning to prices last seen in early 2017. 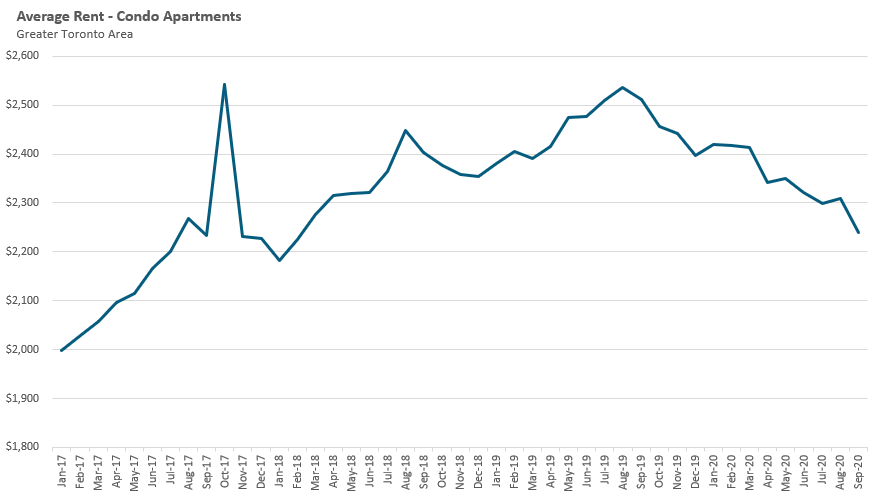 One question I have been getting a lot is - Where are all these condo rental listings coming from?

Is this the product of falling demand due to decline in immigration rates and foreign students due to Covid-19 travel restrictions? Or is there something on the supply side that is driving up inventory, like the number of new condo completions or former Airbnb units moving to long-term rentals as tourism drops and the City of Toronto has introduced tougher regulations? (Watch our Toronto Summit interview between Move Smartly’s Urmi Desai and Urbanation’s Shaun Hillebrand for a discussion of these factors back in July.)

To answer this question, we first look at demand numbers. While there is no price measure of rental demand, the number of leased transactions can serve as a reasonable, though imperfect, proxy. When we compare the number of leased condo apartments during the first three quarters of 2020 to the same period in 2019, leased transactions are actually up 5% over last year.

This suggests that it is supply that has risen so this analysis will largely focus on trying to quantify the source of the rental supply that is coming on the market.

Toronto's real estate market is a bit unique in that a significant number of condo rental transactions are listed for lease with real estate agents on the Toronto Regional Real Estate Board's MLS system which offers us a deep dataset that we can analyze to help find some answers to our questions (this is as opposed to many markets in which agents do not assist with as many condo rentals and so no such data is captured on MLS systems).

Between January and September 2020 there were a total 46,193 unique condominium apartments listed for lease In the Greater Toronto Area, compared to 32,735 units during the same months In 20191.

This means there were an additional 13,458 condos listed for lease during the first three quarters of this year compared to last year.

To answer the question of where this supply surge is coming from, we are going to analyze all the rental listings in each year and categorize them into one of five categories based on their current and historical MLS data.

For all unfurnished rentals, we will effectively look back in time to see whether the last transaction on that unit in the MLS system was a sale or lease and we will note when that transaction occurred. We will also be referring to the completion date of the condominium in cases where there were no previous transactions for a given unit.

The five categories we'll segment rental listings into are described below:

Most long-term rentals (with a minimum 1-year lease) are typically leased unfurnished. Furnished rentals are typically for shorter periods of between one to six months, but more recently they are being advertised for longer terms. Because this suggests that units that were previously being rented out on third-party short-term rental websites like Airbnb which were typically furnished are now being offered for longer term rent on the MLS, we will categorize furnished rentals separately; for the purposes of this analysis furnished includes any units that were either fully or partially furnished.

All other units fall into one of these remaining categories:

Any rental that is in a condominium that was completed within the past 12 months is classified as a rental listing in a new building and considered to be part of new rental supply coming on the market.

If a unit listed for lease was purchased within the past twelve months, it suggests that this unit was purchased by an investor as an income property.

Many condo owners who move out of their units into a house often keep their condo as an income property (i.e., to rent out to tenants). Any unit where the last completed transaction on the MLS was a sale more than a year ago or if there are no completed transactions on the MLS for the unit (e.g., as in the case where the unit was bought pre-construction and the owner moved directly into it) is considered to be previously owner-occupied.

While this analysis categorizes every listing into one of the above categories, it is important to note that these categories are rough estimate - there are gaps and assumptions in this data and analysis.

For example, a condominium that was completed five years ago and was listed for lease for the first time this year would fall into the "Previously Owner Occupied" category. But we don't know If the owner occupied the unit – we are only assuming that they did. The owner could have instead kept the unit empty for five years, rented it out on private (non-MLS) listing websites or been using it as a short-term rental on websites like Airbnb.

That being said, the risk of misallocating a particular unit should apply equally to both periods in our year over year analysis. To mitigate the risk that units are being misallocated differently across time, we have observed and tested for changes in the distribution of key parameters across time.

Focusing on the change (or difference) in the source of rental listings between 2020 and 2019 will give us a clearer picture of where the additional 13,458 condominiums listed for lease in 2020 came from. 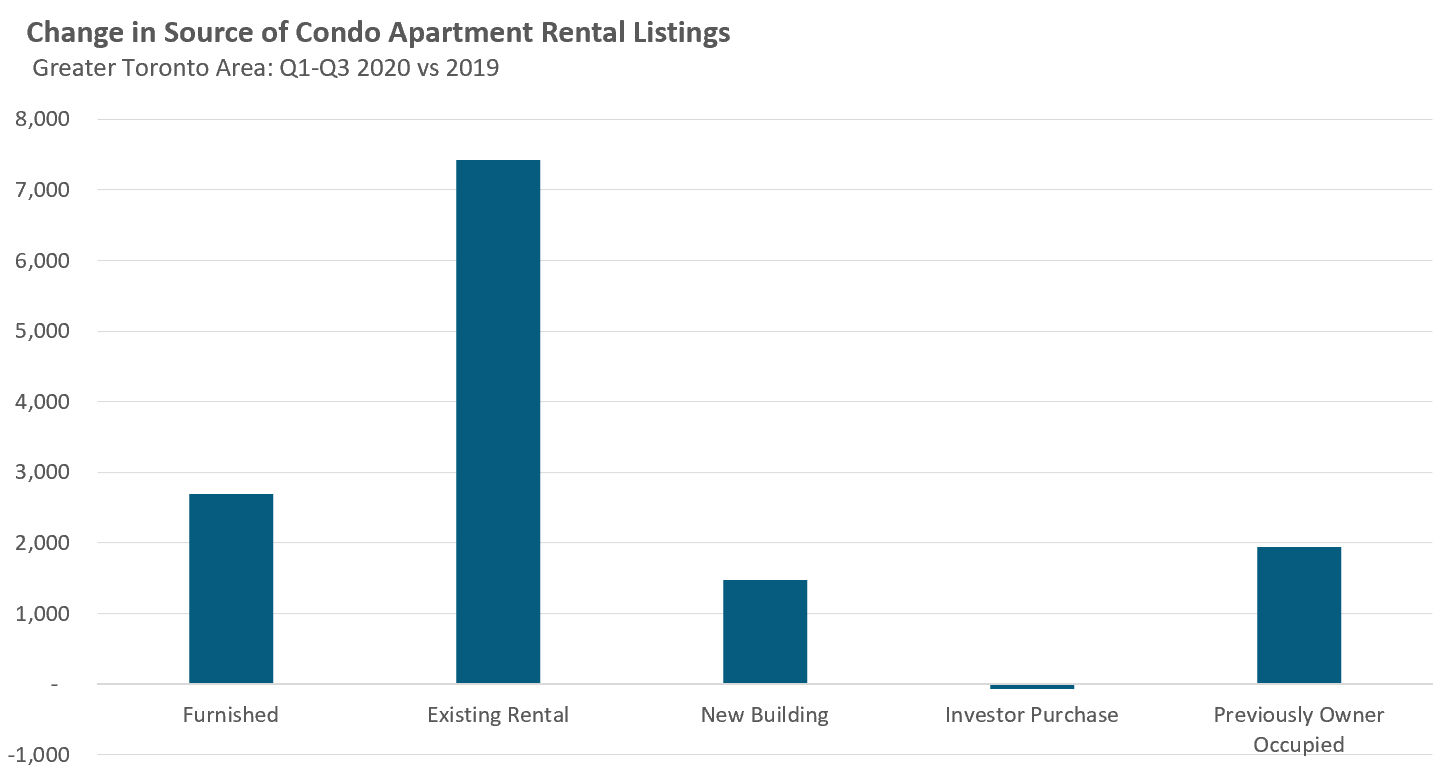 1 Condominium listings were analysed monthly. If a particular condominium was listed more than once during the same month - a common practice when agents reduce the price - that unit would only be counted once in that month. If the unit had been listed for lease in any of the previous three months but not rented, the new listing in the current month would be excluded from the analysis because that unit would have been already counted as a "new listing" in the previous months.

However, the bigger story is the majority of the increase (55%) in new rental listings appears to be units that were previously rented to tenants who have decided to vacate their units; the vast majority of these units are in the City of Toronto.

There are few factors likely driving the increase in renters vacating their units, particularly in Toronto.

Firstly, renters were disproportionately impacted by the economic shocks of the Covid-19 pandemic, many of whom tend to work in hard hit sectors like hospitality, travel and tourism which have seen a sharp reduction in hours worked or outright job losses. Those affected would need to look to more affordable living arrangements including moving back home with family, a trend that is common during recessions.

But job loss is not the only reason to move back home with family. Many millennials who are able to work from home have left their rentals to move back in with parents in order to save money now that Covid-19 has wiped out the main motivators for paying downtown rents – avoiding long commutes to jobs and benefiting from the downtown lifestyle of cultural amenities and night life. In some cases, students who were living in downtown condos owned by their parents have left them for their family homes as classes have moved online.

In addition, the specific dangers posed by Covid-19 has many renters wary of densely populated high rise buildings with many shared indoor communal areas. Rentals in low-rise duplexes or triplexes offer more seclusion and more outdoor space and it is noteworthy that average rents for units in houses have not seen a decline in prices so far.

So it appears that the main driver of new rental listings supply is not from a “new” source of supply such as units previously being rented out as Airbnbs or, as we will look at next, newly completed condo buildings being rented out by investors or owners, but existing supply being vacated. The increase in condo rental listings is mainly due to a sharp decline in demand for condo rentals due to the Covid-19 pandemic, particularly in downtown Toronto, where the majority of condo rentals are.

On the supply side, we see in the above chart that new condo completions accounted for 11% of the increase in new rental listings this year vs. last year. There was a 1% decline in the number of rentals attributed to investor purchases and a 14% increase in rentals previously owner occupied.

Overall, these results suggest that we are not out of the woods yet and that we will likely see further downward pressure on the Toronto area rental market.

The decline in demand for downtown Toronto condos will continue as work-from-home and other pandemic restrictions appear set to continue well into 2021.

The transfer of short-term to longer term rental supply looks set to continue as well. The City of Toronto's short term rental registration system went live in September and all Airbnb operators will have to register their units by the end of this year. The new rules only allow homeowners to rent their principal residence for up to 180 nights per year. Many of these Airbnb rentals may find their way into the long term rental market or the investors may opt to sell their units.

The vulnerabilities facing Toronto's rental market are not new. Back In January, I discussed why the discrepancy between condo rents and prices was one of the “big vulnerabilities in the market”.

The decline in average rents we are seeing as a result of this recession has only widened the gap between condo rents and prices making the condo market even more vulnerable, particularly given that a significant number of condos in Toronto are owned by small investors who are likely to experience financial pressure as a result.

The ability of these small investors to weather this economic storm will have a significant impact on the future direction of Toronto condo prices – and a material impact on our economic recovery as a whole.