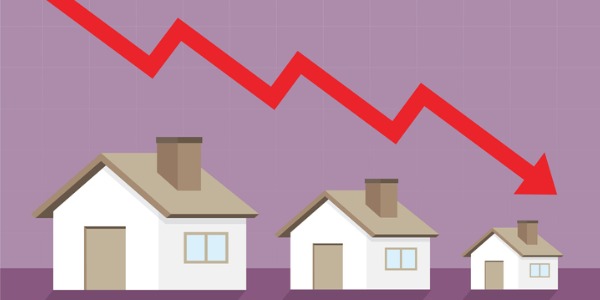 Our Monthly Market Report looks at how well major forecasts for Toronto area home prices are holding up six months after the start of the Covid-19 crisis.

The Toronto Real Estate Summit co-hosted by Move Smartly and Realosophy Realty earlier this Summer (watch again here) emphasize just how wide a spread there was between expert forecasts at the start of the Covid-19 crisis in March.

The most pessimistic forecast came from the Canada Mortgage and Housing Corporation (CMHC) which released a forecast in May which suggests that “the average MLS price will decline by 9% to 18% from its pre-COVID-19 levels before beginning to recover in the first half of 2021.”

While I believe in the value in thinking through the worst case scenario, I thought it would be helpful to take a look at how accurate CMHC’s forecast has been to date and to assess the likelihood of a decline in prices by year end as we head into the fall market.

It’s important to note that the CMHC’s forecast is more nuanced than many media headlines suggested --  the widely reported 18% projected price decline was a national average, with variances between different regions, so it’s important to take a look at CMHC’s specific forecast for the Greater Toronto Area (GTA).

"Home sales in the Greater Toronto Area (GTA) will decline for the rest of this year, and then start to recover by 2021 Q1 and show growth throughout 2022."

The GTA had 87,754 sales in 2019 and was on pace in early 2020 to exceed 90,000 sales this year. CMHC's sales forecast (see table below) showed quarterly sales as seasonally adjusted annual figures.

CMHC Forecast for the Toronto Area 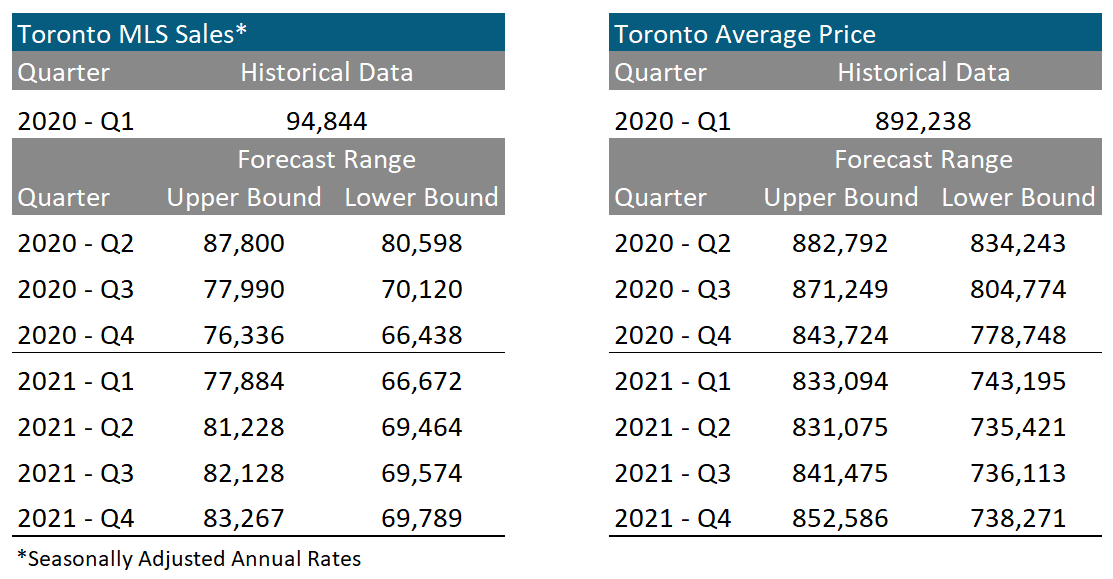 CMHC predicted that in their best case scenario (the upper bound) annualized seasonally adjusted sales in the third quarter of this year would fall to 77,990 but possibly as low as 70,120 (their lower bound).

While we have one month left in the third quarter, the first two months can give us some insight into how likely it is that CMHC’s prediction will come true.

In July and August of 2020, the GTA had 21,493 home and condo sales, a 33% increase over last year and the highest volume of sales for July and August on record. Even if home sales in September see no increase over last year, the number of sales in Q3 2020 would come to an annual seasonally adjusted sales volume in the 115,000 range; 47% higher than CMHC’s optimistic forecast.

Now assuming that we will see the July and August sales highs continue for the rest of the year is not realistic so it is unlikely that we will see 115,000 homes sales in the GTA in 2020. It's more helpful to consider that sales from Jan to Aug this year as compared to the same period last year are down just 4%, which suggests that the Toronto market is on track to achieve a similar sales volume to 2019 of 87,754.

Now, let’s turn to the CMHC’s prediction for average home prices in the GTA:

"Average house prices were on an upward trajectory during the time period leading up to the provincial lockdown in mid-March. They will decline throughout the remainder of this year and into 2021."

For the first two months of the third quarter (July and August), average home prices in the GTA were $954,000, 10% above CMHC’s forecast and 7% above the average price for a home during the first quarter.

It is worth noting that there was some volatility in the types of homes selling in Q2 and Q3 this year which is skewing average prices quarter over quarter and year over year. In the Covid-19 crisis, the second quarter saw disproportionately more condos sell vs house (pulling average prices down); in the third quarter, that trend reversed resulting in proportionately more houses selling compared to condos (houses are generally more expensive so more house sales tends to skew the average price higher).

But even if we control for the difference in the composition of homes selling this year, average home prices for July and August would still be in the $918K range – well above CMHC’s forecast and higher than the first quarter.

Normally, it would be unfair to judge any economic forecaster too harshly for an inaccurate forecast during such unprecedented and volatile times. But CMHC took a very strong position when it came to their Covid-19 forecast as opposed to others.

At the start of the Covid-19 crisis, CIBC and Scotiabank were forecasting a slight decline in prices while the Toronto Regional Real Estate board was expecting prices to end the year flat compared to 2019. Re/Max predicted prices would remain stable or possibly see a single digit correction. Royal LePage was forecasting a modest 1.5% increase in prices for the GTA while TD Canada Trust had one of the more positive forecasts expecting prices to end the year up 8%.

CMHC’s CEO Evan Siddall was notably not impressed with any of the forecasts that were more optimistic than their own, saying that:

Given that TD had the most optimistic forecast, one can only conclude that Siddall believes that something other than an honest economic analysis was behind it. But interestingly enough, with average home prices up 13% year to date, TD's forecast is on pace to being the most accurate while CMHC’s is on track to be the least accurate.

CMHC was so confident that house prices would crash, it felt it was critical to unilaterally tighten credit to “protect future home buyers” from the “tragic prospect of foreclosure” which it did on July 1 by introducing new rule changes for those looking to qualify for CMHC mortgage insurance.

Normally, changes in lending guidelines for insured mortgages are led by the Department of Finance and all mortgage insurers (CMHC and their private sector competitors) have to adopt the same changes. But Canada’s Department of Finance wasn’t persuaded by CMHC’s analysis and recommendations so they did not require CMHC’s competitors to tighten their lending guidelines along with CMHC.

Since then, the “high risk” buyers the CMHC was trying to protect with their rule changes have gone to competitors and the CMHC has experienced a drastic decline in revenue and market share.

While there are plenty of unknowns to come in the remaining quarter of this year including the impact of the rolling back of government emergency income support and mortgage deferral programs, the market would require a very dramatic change in sales and home prices to even approach CMHC’s least pessimistic forecast.

So does this mean if a global pandemic can’t slow down Toronto’s real estate market, nothing will?

Of course not. The road ahead is still a bumpy one.

There are of course still significant economic risks ahead for our economy. At the Toronto Real Estate Summit, Manulife’s Frances Donald unpacked some of the risks ahead with this next phase of our recovery.

The condominium market on the other hand is starting to show signs of cooling. While the condo market is still competitive and prices are still rising, the increase in resale inventory and declining condo rents will be important trends to keep an eye on in the months ahead.

The slowdown we were first seeing on the ground over the past two months is now showing in the...
Read More
Condos | Toronto and GTA

Condo buyers were pulled eastward in the search for affordability.
Read More