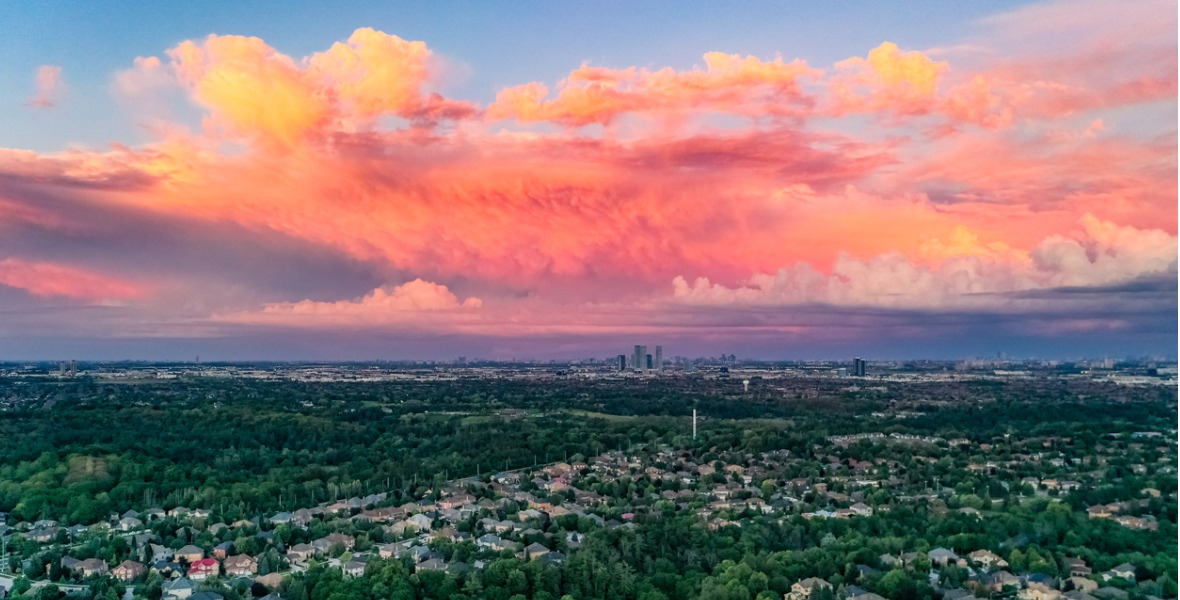 A 56% decline from inventory levels year-over-year as the fall market is expected to remain as competitive as it has been this summer. 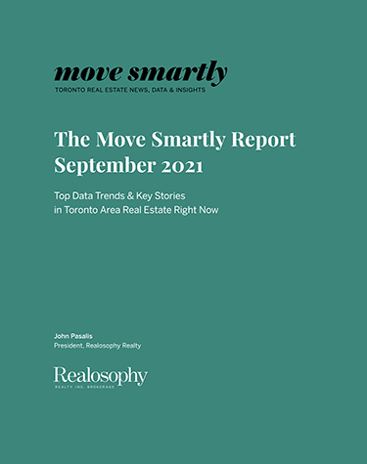 The summer came to a close showing strong signs that in the fall we will continue to see a competitive market for homes in the Toronto area.

While house sales were down 30% on a year over year basis, sales were well above the pre-COVID levels in 2018 and 2019 for the month of August.

The big factor that is keeping Toronto’s housing market very competitive is the declining number of homes coming on the market for sale. New listings were down 46% over last year and well below levels in 2018/19.

At the end of August, the Toronto area had only 4,001 houses available for sale, a 56% decline from inventory levels last year and well below the 11 to 12,000 active house listings that are more typical for the month of August.

The average price for a house in August was $1,319,214 with home prices plateauing around the $1.3M range since the start of the year.

Condominium sales in August were up 1% over last year and above the pre-COVID levels in 2018 and 2019 for the month of August.

The number of condos available for sale at the end of the month, or active listings, was down 44% over last year.

House sales (detached, semi-detached, townhouse, etc.) in the Toronto area in August 2021 were down 30% over the same month last year.

Sales will likely continue to be negative on a year-over-year basis until at least the first quarter of 2022 since we’ll be comparing against a period that saw a sudden shock in demand for houses following the initial COVID lockdowns. But it’s worth noting that sales in August were above levels for the same month in 2018 and 2019. 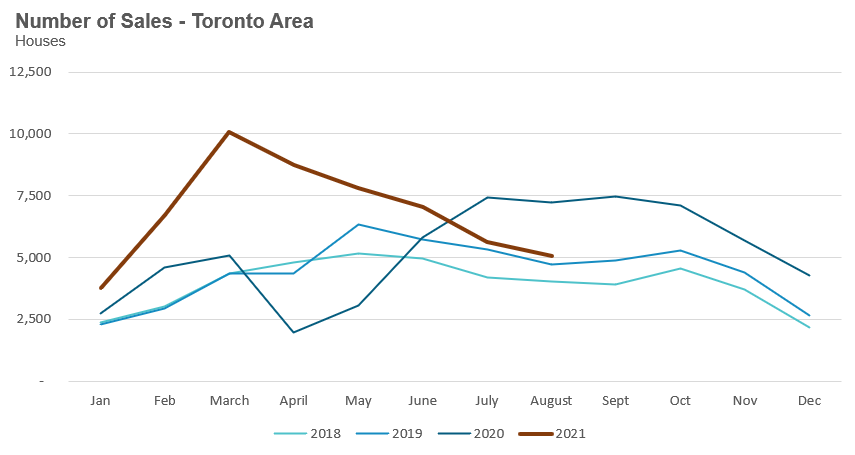 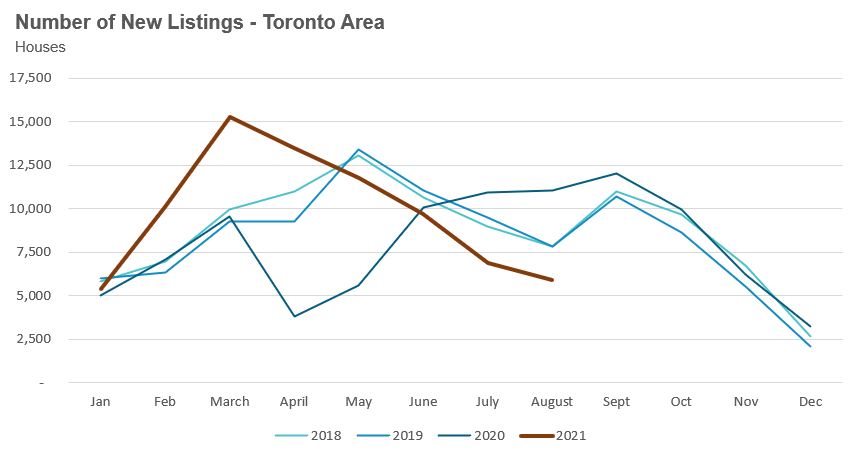 What’s behind the decline in new listings we’ve been seeing recently?

As I mentioned in last month’s report, I suspect there are two primary factors driving this. Firstly,with the provincial Ontario government easing lockdown restrictions this summer, many households are in vacation mode and in no rush to spend more time in their home to get it ready for sale. Many of these homeowners are pushing off their sales to the fall.

The other key factor that might be driving this is a desire from many homeowners to not sell their current home when upsizing or downsizing to another property. Real estate has been a strong performing asset over the past twenty years and with interest rates below 2% homeowners are motivated to hold on to their properties if they have the financial means to do so.

Our brokerage is in the process of quantifying these investors to better understand their impact on the housing market.

The number of houses available for sale (“active listings”) was down 57% when compared to the same month last year and 64% below the inventory levels seen in 2019. 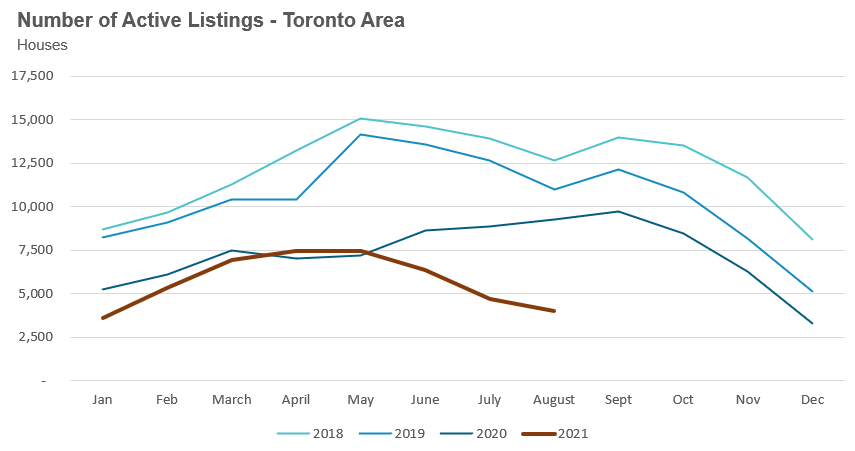 This August, the market remained very competitive with an MOI of under 1.

While the current level of MOI gives us clues into how competitive the market is on the ground today, the direction it is moving in also gives us some clues into where the market may be heading. The MOI has remained relatively stable at or below 1 MOI for the past eleven months. 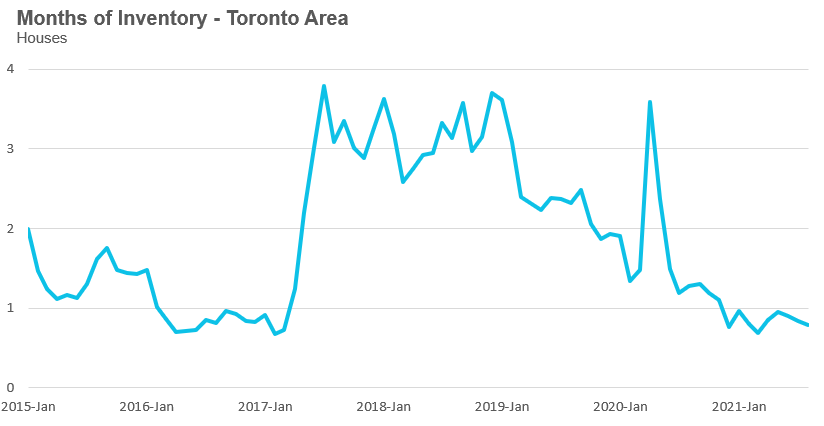 The share of houses selling for more than the owner’s asking price climbed from 63% in July to 68% in August. 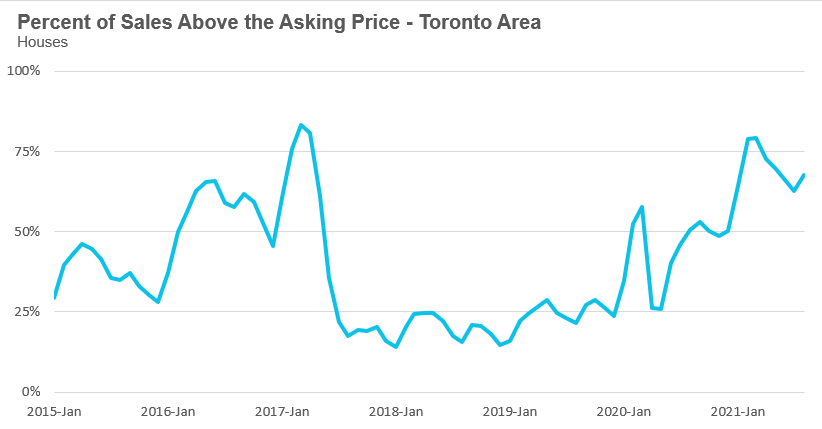 While average house prices are up significantly over last year, house prices have plateaued in 2021 with average prices remaining relatively constant in the $1.3M range since the start of the year. 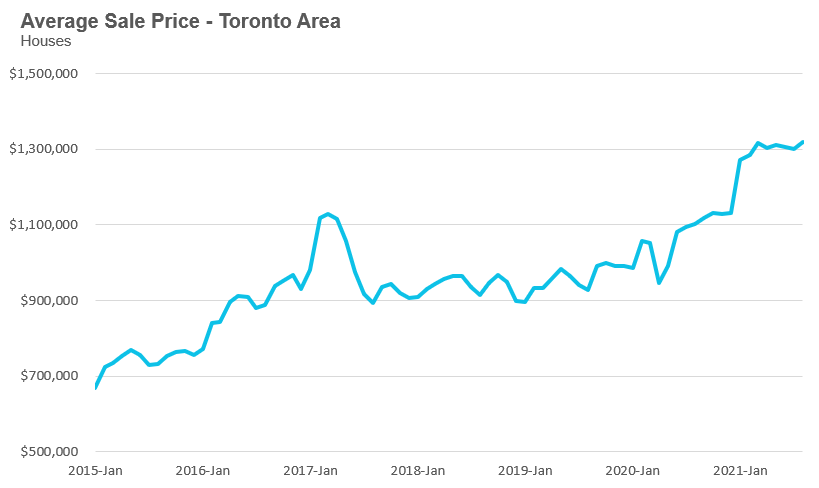 Condo (condominiums, including condo apartments, condo townhouses, etc.) sales in the Toronto area  in August were up by 1% over last year and above volumes in 2018 and 2019. 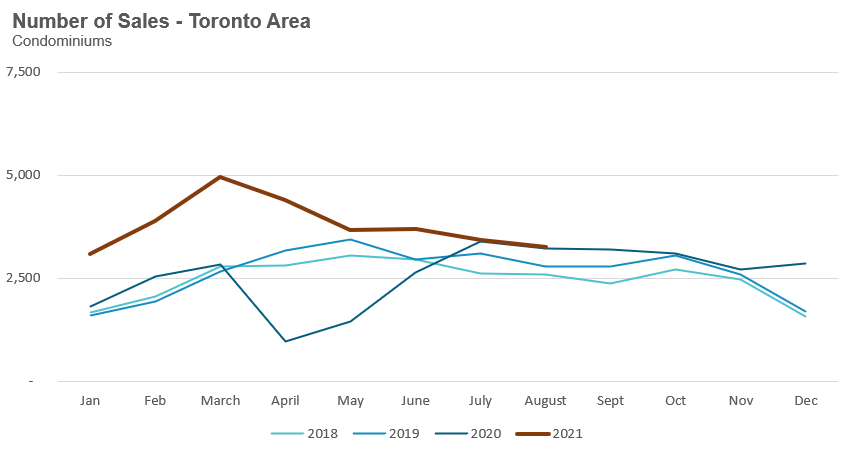 The number of condos available for sale at the end of the month, or active listings, was down 44% over last year, a period that saw a surge in condo listings due to declining prices, falling rents and rising vacancy rates. 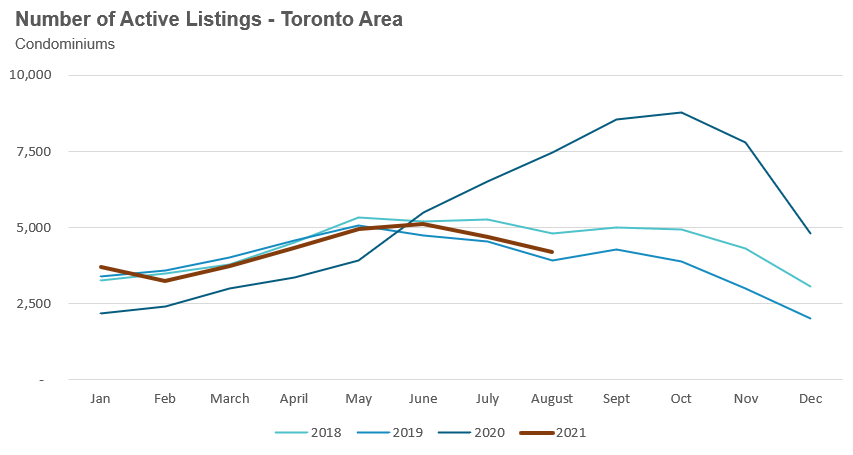 The relatively strong demand of new listings (supply) helped keep the MOI at 1.3 for the month of August, up from 0.8 MOI in March. 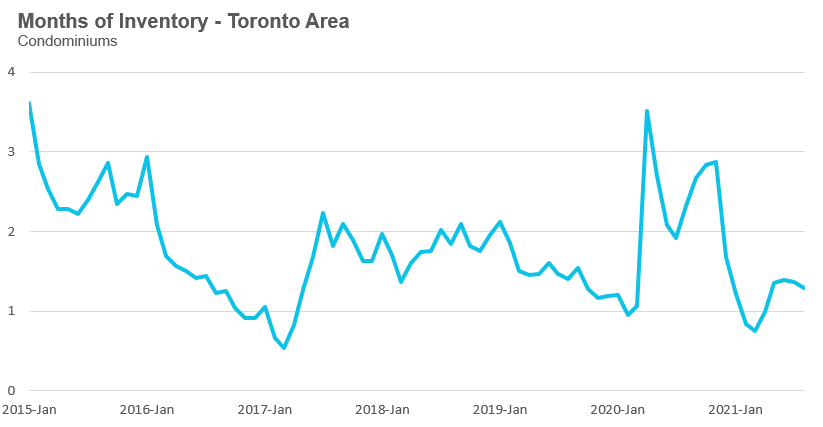 The competition for condos is easing slightly with the share of condos selling for over the asking price falling from 63% in April to 45% in August. 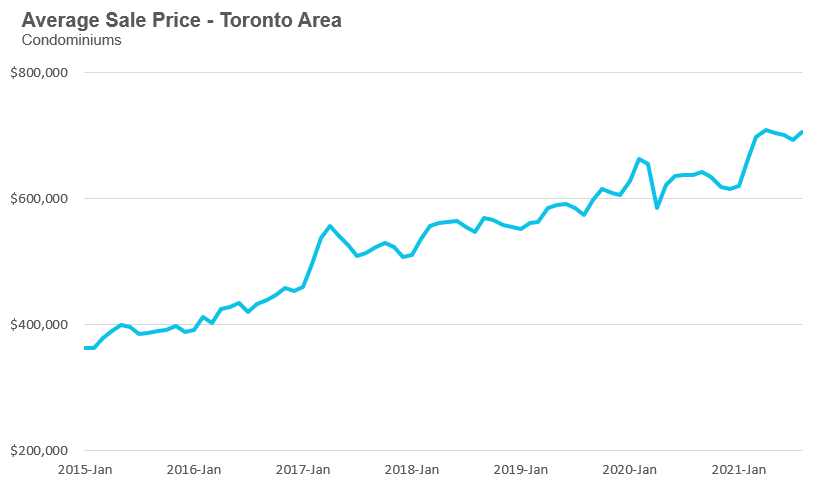 Sales across all five regions in the GTA were down in August while average prices were up on a year-over-year basis. The decline in new listings helped keep the market competitive with MOI at or below 1 across the entire GTA, indicating a strong seller’s market.

Toronto and Peel saw condo sales up on a year-over-year basis while the other regions saw a decline in sales. Average prices were up double digits across the suburban regions and up by 7% in the City of Toronto. Also indicative of strong market conditions, current MOI levels are below last year’s levels for all five regions.

All Market Performance by Neighbourhood Map, Toronto and the GTA