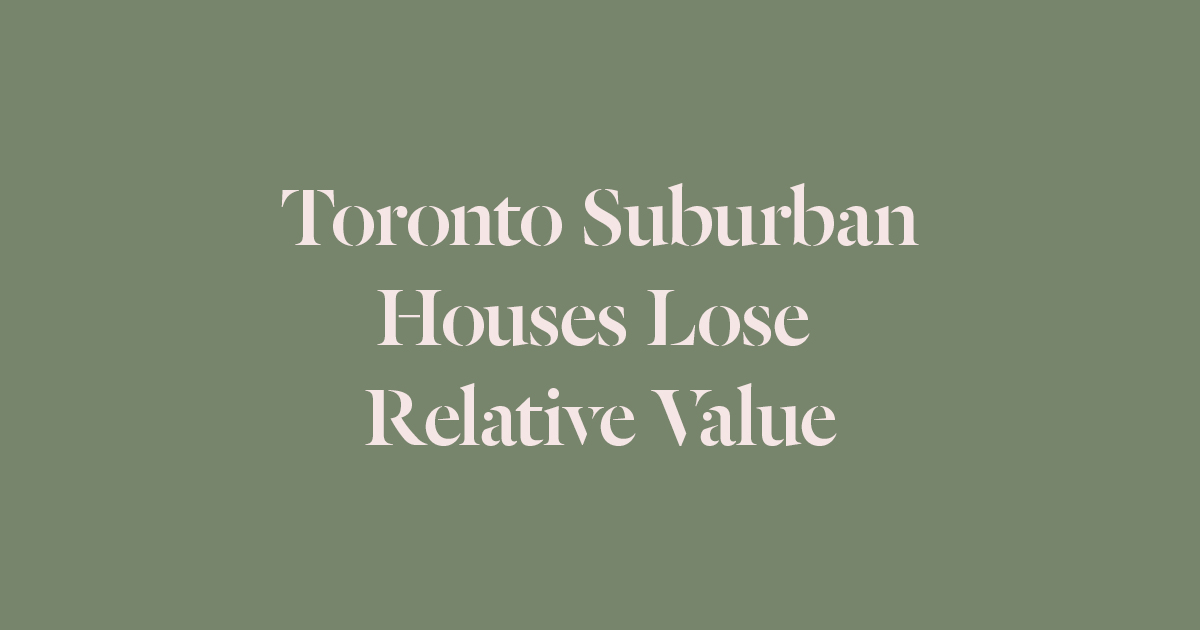 Some areas that saw the fastest price gains during the pandemic are now coming down.

As featured in our monthly Move Smartly Report: Hit the play button above to watch John's video and read full story below - click on report image below to read all key stories for this month 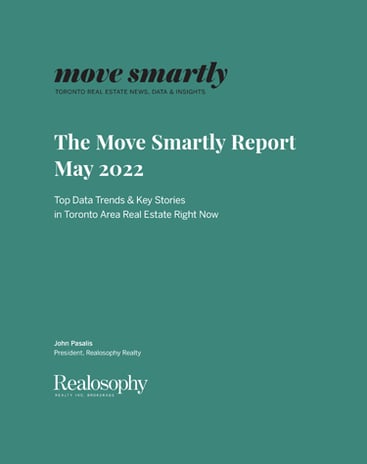 As discussed in my market report for this month, one of the big drivers behind the decline in prices we are seeing for low-rise homes in the Toronto area is that buyers are pulling out of the market.

The best way to see this trend is to look at the number of home sales on a weekly basis.

Looking at this chart below for all of the Greater Toronto Area, we can see that low-rise house sales peaked in early March and have been on a downward trend since then. As discussed in my report, this is a surprising trend during what is normally a busy time (see ‘It’s Spring Market Time So Why Are Toronto Home Sales Falling’ in report). 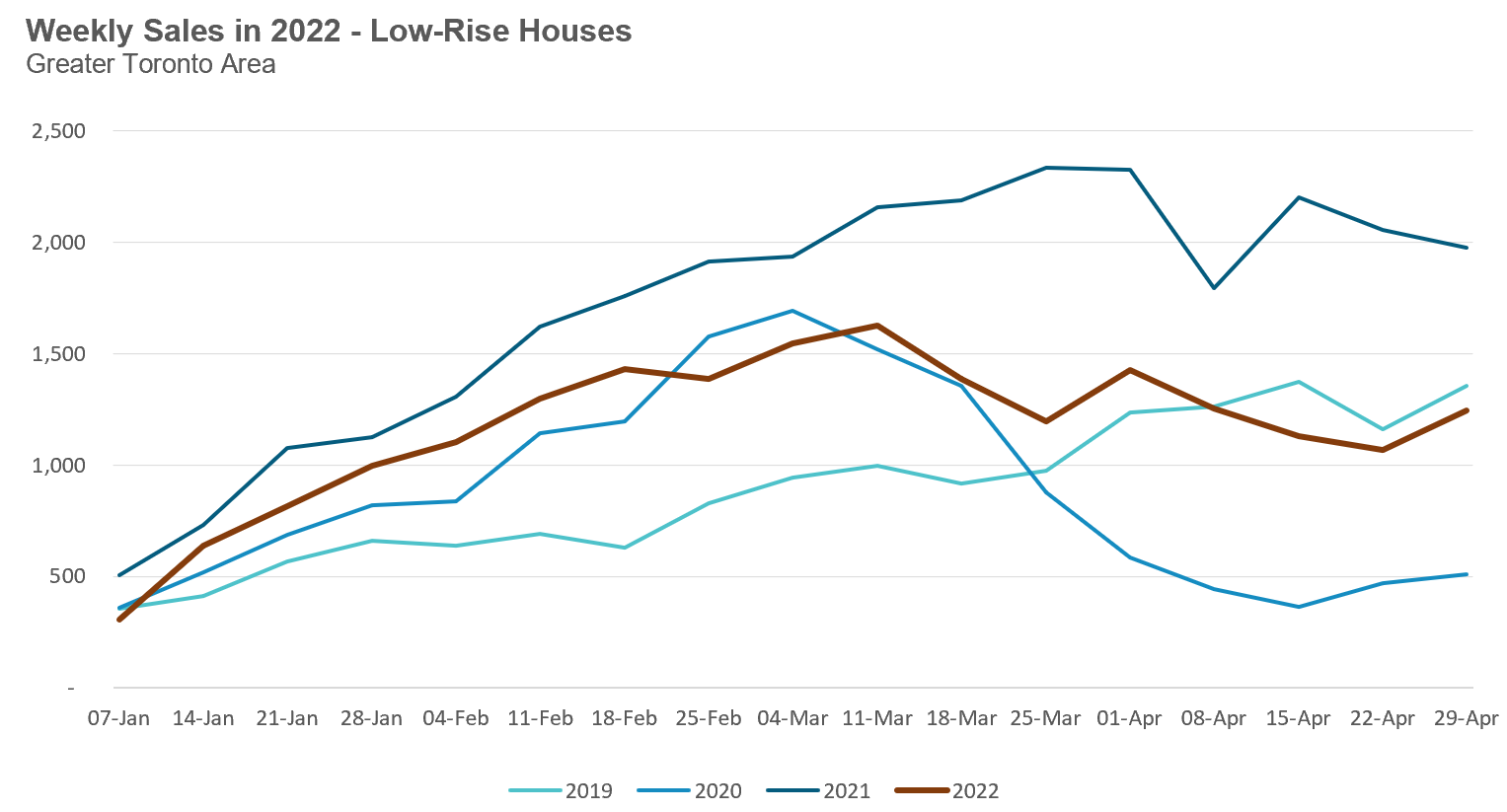 While sales were still trending up in early March, we can see from this next chart that average house prices began to trend down in late February. As discussed earlier in this report, this corresponds with the observations I shared in my March market report about the low-rise market beginning to cool down in mid to late February.

Over the past ten years, home sales across the Greater Toronto area have increased by an average of 8% between March and April. We can see from the chart below that a number of municipalities in the Toronto area are now seeing sales fall by more than 25% over the past month. 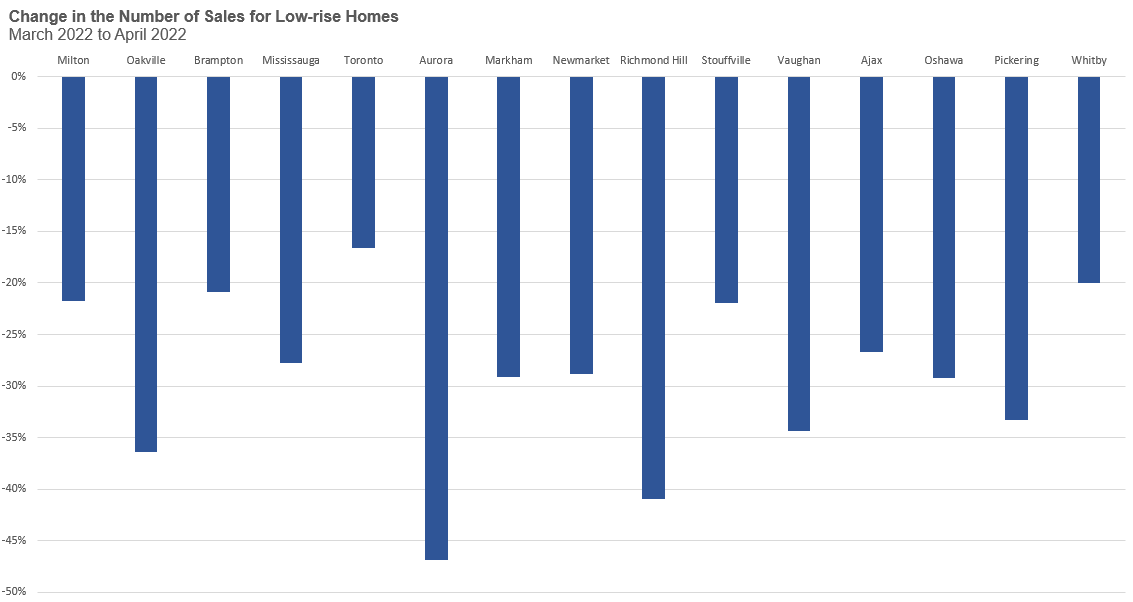 Since house prices peaked in February of this year, in the next chart below, I’m now going to compare the change in median house prices over the past two months. We typically don’t compare changes in median prices on a month-over-month basis because seasonal differences can impact prices. That being said, over the past ten years, median and average prices haven’t  changed very much between February and April, and where they have, they’ve trended up slightly.

It’s also worth noting that while we typically compare house price changes on a year-over-year basis, doing so in a slowing market can be very misleading. Median house prices are actually up 18% over last year which suggests prices are trending up, but on the ground we can see that prices have actually been trending down the past couple of months.

It’s difficult to explain all of the regional differences we are seeing in the change in sales and prices particularly as we are only looking at a couple of months of data.

The urban housing market has performed better in part because house prices in these areas did not grow as much as they did in the suburban market (an illustration of the ‘the higher up, the further to fall’ phenomena). This means that when compared to suburban houses, urban houses are a better value today than they were before the pandemic. This is a trend that may continue as people return to their offices  and gas prices continue to surge — and the urban exodus we saw during Covid-19 pandemic may begin to reverse.