In this month's Move Smartly report, we look back at 2020 and how COVID-19 impacted the Toronto real estate market. 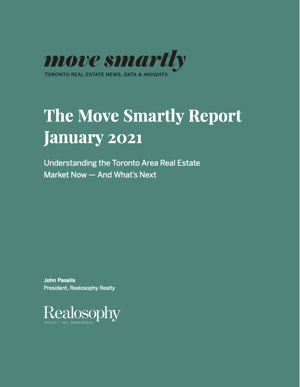 Any discussion about how Toronto’s housing market responded to the onset of the COVID-19 pandemic in 2020 has to start with how the market was performing before pandemic-induced lockdowns were introduced in mid-March.

As we paid relatively little attention to the reports of a new coronavirus coming out of China and impacting Italy in early 2020, the first quarter of 2020 in Toronto real estate had all the same signs of the boom times of speculative and irrational frenzy we saw several years earlier throughout the Greater Toronto Area (GTA).

It was typical for houses to receive 20 to 30 offers on their offer night and to sell for significantly above market value.

Here are some of the media headlines describing the market at that time: 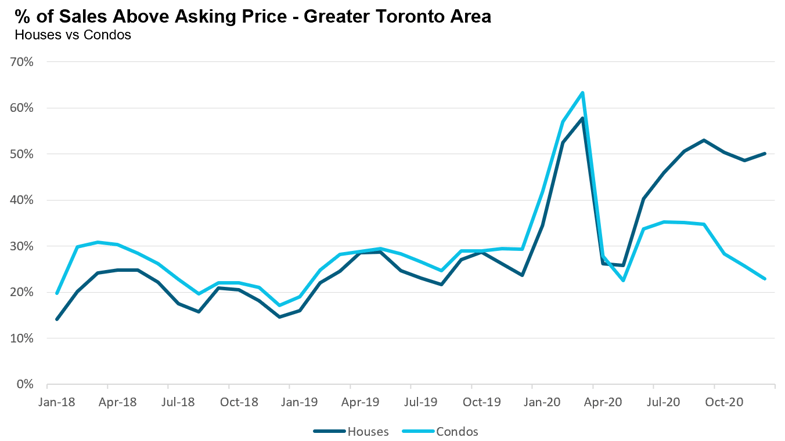 The Onset of Covid-19: First Lockdown in March

While the Province of Ontario went into a lockdown in mid-March, shutting down activity in the downtown core as office workers began to work from home and all residents were urged to stay at home as much as possible, we didn’t see the resulting impact on the real estate market until April when sales plummeted 67%; in May, sales were down 54%.

The market had, in effect, frozen. Few buyers were going out to look at houses and sellers had a very hard time selling their homes.

By May, most big banks and housing analysts had released their forecasts for Toronto’s housing market in light of the COVID-19 lockdowns and recession that was expected to follow. Most forecasts were expecting house prices to remain relatively flat or see a slight single digit decline. The Toronto Dominion (TD) Bank forecast of an 8% increase in house prices during the pandemic was the most optimistic.

The most pessimistic forecast came from Canada’s housing regulator, the Canadian Mortgage and Housing Corporation (CMHC), which predicted that house prices would fall by 9 to 18% from their pre-COVID-19 level.

By the time my colleagues and I decided to respond to the worried questions of real estate consumers by hosting a free, online summit in July to hear the views of top economists, housing analysts, and practitioners on where things might be heading, the market had already begun to bounce back unexpectedly quickly. Buyers re-entered the market in June, resulting in that month seeing only a 2% decline in sales compared to the previous year.

Next, the market for houses (excluding condos) returned to the frenzied pace we saw during the first quarter of 2020. By August, sales were up 40% over the previous year and more than 50% of houses were selling for more than their asking price.

This sudden rebound caught most economists and the real estate industry by surprise. There was still a considerable amount of economic uncertainty, Canada’s unemployment rate was still in double digits and hundreds of thousands of Canadians were deferring their mortgage payments. This type of economic environment Is typically not accompanied by a boom in the housing market.

Looking back, it’s clear that the rebound was driven by three main factors.

Firstly, when we look at the change in employment rates by hourly wage we see that this recession disproportionately impacted lower income earners vs. higher income earning households. The vast majority of buyers who hit pause on their home search in April never lost their job or saw their incomes decline, they just started working from home.

The second factor behind the surge in sales was pent-up demand. As noted above, Toronto’s housing market was unbelievably competitive in the first quarter of 2020 with demand far outpacing the supply of houses available. The buyers that hit pause in the second quarter with the onset of Covid-19 restrictions didn’t disappear — they were just waiting for the right moment to re-start their home search. The busy spring selling market was delayed for two months, resulting in inflated home sales in the summer which made year-over-year comparisons slightly misleading.

The third factor driving the rebound was a shift in what homeowners want in a home.     Working from home led many homeowners to value houses that had enough space for home offices, more space for kids to play in and bigger back yards.

This shift in preferences resulted in new buyers entering the market who were not looking to buy a home prior to COVID-19. This "urban exodus" saw many households sell their smaller downtown houses in favour of larger detached homes in the outer suburbs or beyond.

Given that this recession had a disproportionate negative impact on lower income earners, it’s no surprise that the rental market was hit much harder than the resale market.

By October, there were over 12,000 condominium units available for lease in the GTA — more than 3 times the number of units available the year before. In my October 2020 report, I looked at the key factors driving this surge in rental inventory and the number one factor was tenants simply moving out of their units.

In some cases, they moved because of lost jobs or income which reduced their ability to pay rent; however, in other cases, they moved back home with family due to other COVID-19 impacts. Pre-COVID, a downtown condo offered its renter a short walk to their office or school and a vibrant culture and nightlife.

After the onset of COVID, a 500 sq. ft. condo suddenly felt a bit too small to live and work in at all hours. The absence of the need to commute to work or school as such activities moved online and the city lifestyle that previously made up for the lack of space added to this push, as did concerns about the risks of COVID transmission in shared spaces like elevators and public lobbies, and in the case of those sharing with roommates, kitchens and other sharing living spaces within units.

Others sought also to mitigate the negative effects of isolating alone in lockdown as opposed to living with family. As a direct impact of COVID-19, average condo rents in the old City of Toronto (downtown) fell by a remarkable 19% by December and 10% in the GTA, something that could hardly be imagined prior to the pandemic, when high demand and high rents characterized the rental market.

While demand for low-rise houses in the GTA surged in the second half of 2020, the downtown condo market in Toronto was sluggish. Inventory surged and prices fell by roughly 10% from their peak during the first quarter of 2020.

Downtown condo apartments were slow to sell with many units getting only 2 to 3 showings a week, a stunning turnaround for what was the hottest segment of the market only months earlier.

In November, our sales team at Realosophy Realty noticed a sudden surge in interest from condo investors who were eager to capitalize on the recent price declines in downtown condos. This resulted in a surge in condo sales in December (up 75%) and Months of Inventory (MOI) levels tightening from 2.9 in November to 1.7 MOI in December.

This surge in investor demand is interesting given that the rental market remains sluggish and rents remain down. But investors tend to be an optimistic bunch and they believe that the rental market, and rents, will be back to normal in no time and that condo prices will also rebound in 2021, so they are motivated to buy for less now while they can.

The Mortgage Deferral-Cliff Has Come and Gone

As part of the response to the unprecedented economic shutdown necessitated by the onset of COVID-19 in March, banks allowed homeowners who were negatively impacted financially to defer their mortgage payments for up to six months. By the end of May, 12% of all mortgages were in deferral and CMHC predicted that this number could reach as high as 20% by September.

By October/November, the hundreds of thousands of households that deferred their mortgage payments for six months would have to start re-making payments again, resulting in what has been termed a “deferral-cliff”. The concern in the summer months was whether households would be able to start making their payments again or whether banks would need to starting working with financially distressed households, unable to hang onto their homes.

But by the end of the year, it looked like the deferral cliff wasn’t much of a cliff after all. The big banks reported that the vast majority of households that were deferring their mortgage payments were back on track with their payments after the deferral period ended.

It turned out that some households deferred their mortgage payments as a precaution due to the fear of — rather than the actual experience of — financial hardship.